“Ip Man was the film that made Donnie Yen (甄子丹) become the ‘strongest in the universe,’” said producer Raymond Wong (黃百鳴). “Now that he’s in the skies and no longer with us mundanes, we hope Master Z will make Max Zhang become the ‘best on the ground.’ Make it more down-to-earth.”

True to the nickname, Max Zhang told reporters that he probably won’t anywhere up, as his wife, fellow actress Ada Choi (蔡少芬), is the one who runs the house. After making fun of his wife’s poor Mandarin on social media, Ada immediately warned, “Someone doesn’t want to live.”

“I only have half a life left now,” said Max. “I didn’t expect to her to give such a huge reaction. This is why the world isn’t fair. My Cantonese is already not that bad, but if I say a wrong word, she’d laugh about it for years. And then there’s her Mandarin. I laugh a little bit, and she wouldn’t even let me! This is why you have to be careful about what you say!”

Kevin Cheng said, “It should be okay to discuss about these things behind closed doors, just not outside.” Max quipped, “I don’t think I’ll be able to come out!”

Asking Kevin if he’s also afraid of his wife, he said, “It’s good to be afraid of your wife. There are benefits. Actually, I dare say that men are not afraid of their wives. They respect them.” Max said, “That sounds very familiar!” Kevin added, “Being respectful and afraid are two very different things.” Max laughed, “No I’m actually afraid! The one I have at home gets violent! I have no place at home! I can only get my manliness returned in movies!”

Kevin said, “Max is afraid, but I respect. My [wife] is not violent, and I also won’t tease her in public.” When Max asked Kevin if he would tease her behind closed doors, Kevin said, “That’s a different kind of sentiment. I don’t know what you were talking about. (Taking care of your wife like a queen?) She’s pregnant, so of course. I don’t want to get her mad! I just want her to be happy. Now I have to be very careful at what I say. I have to think about it first.”

Grace and Kevin threw a cozy party at home for their second’s son birthday. 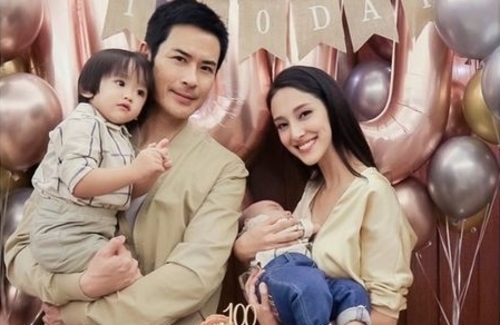