Appearing at a Beijing press conference for their new web-drama, Guardian Angel <守護神之保險調查>, Bosco Wong (黃宗澤) explained that the series has the most intense bed scene he has ever done in his career.

Also attending the press conference were Bosco’s co-stars, Michael Miu (苗僑偉), Kate Tsui (徐子珊), Annie Liu (劉心悠), and Irene Wan (溫碧霞). In order to hype his fans up for this drama, Michael has been actively uploading photos and promotional clips on his Weibo account, including hints that he and Bosco will have a lot of scenes together.

In the drama, both Bosco and Michael will be playing private insurance investigators who work together in order to solve various cases. Besides being best buds on screen, the two actors are very good friends in real life – often times joking and making fun of each other. During the press conference, Michael laughed, “They gave me all the killing and shooting parts – and all they’re responsible for is dating and romance.”

Upon hearing Michael complaining about his character, Bosco then exclaimed, “The director told me that I’ll be pranking Michael a lot – that’s why I even agreed to film in the first place!”

Shaw Brothers teams up with Mainland’s digital broadcast giant – IQIYI, to bring an exciting storyline and never-ending action to Guardian Angel. The web drama will officially premiere on December 6, 2018. 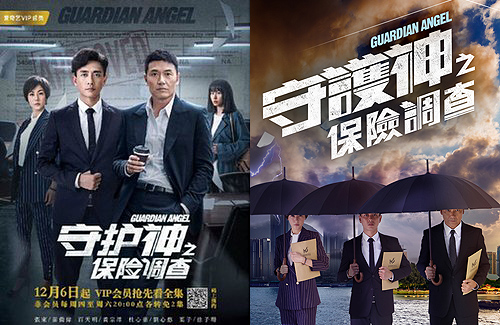