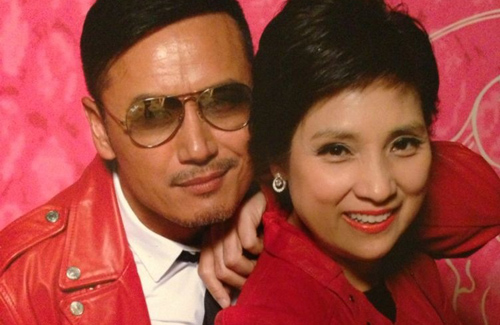 While other guests brought gifts, Benette brought along a band to sing with Jamie. Although Jamie and Michael’s children already left Hong Kong and were unable to attend the party, Jamie said that their daughter Phoebe Miu (苗彤) sent her birthday cake. The family video-conferenced online and Jamie cut the cake before the camera. Jamie said, “She even promised me that she would help me eat the whole cake!”

Over the Lunar New Year holidays, Michael will be busy filming a new TVB drama with Raymond Lam (林峯) and Charmaine Sheh (佘詩曼). Regarding news that Raymond did not want to partake in the drama because he does not want to work with local actors, Michael said, “That’s a rumor! Raymond is very obedient. He hardly throws tantrums.”

Tabloids also claimed that Felix Wong (黃日華) is trying to mend his broken relationship with TVB in order to allow his daughter Adrian Wong (黃芷晴) enter the station.   Although Felix once critiqued TVB publicly for its unfair treatment of its employees, he has been more guarded lately and begun to distance himself from HKTV Chairman, Ricky Wong  (王維基). Michael remained positive over the possibility that Adrian may move over to TVB, “That’s good! Welcome! His daughter is a beauty!”