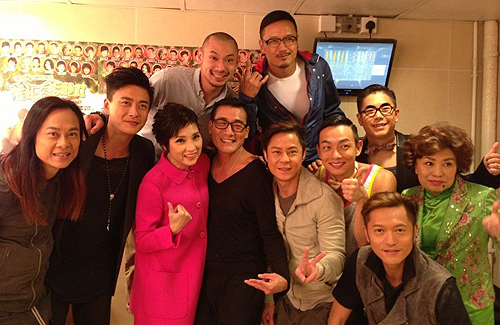 Above: Michael Miu and Jamie Chik celebrate with friends after performing in “Shrimp the Tsai Daddy”.

The classic family skit,  “Shrimp the Tsai Daddy” <蝦仔爹地> from 1980s variety show, Enjoy Yourself Tonight <再會歡樂今宵> is back on stage as a musical.

The cast includes Lo Hoi Pang (盧海鵬) as Squinty Eyes, Meg Lam (林建明) as Great White Shark, Jamie Chik (戚美珍) as Ah Chun (阿珍), and Louis Castro (賈思樂) as the Shrimp Tsai.  There will be nine performances in Hong Kong, and the revenue earned from the musical will be donated to the Hong Kong charity fund.

Michael Mui dressed in a black suit and looking like one of the security guards, sang one of Andy Lau’s classic songs. Michael revealed that his buddy, Andy, walked him through the song in detail by teaching him every single beat. Michael even joked that Andy was begging him, “Brother, please don’t mess up my song!”

Raymond Lam and Lawrence Ng were also the guest stars in the show. Lawrence played an extremely feminine doctor which garnered much laughter from the audience. While Raymond was singing on the stage, Meg Lam suddenly came out and kissed him on his cheek. Raymond was shocked and felt embarrassed, but quickly recovered and carried on with the show.