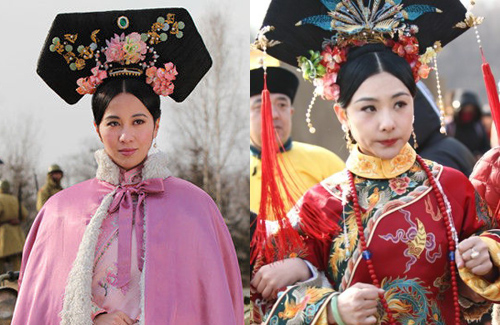 The 100 million RMB television drama project Eastern Battlefield <東方戰場> is currently actively shooting in Changchun, Jilin province. Starring Michelle Ye (葉璇), Liu Xuan (劉璇), and Zhang Lu (張魯), Eastern Battlefield is a wartime epic that takes place during the Japanese invasion in China during the 1930s through the 1940s. The story starts off with the infamous Mukden Incident in 1931 and ends with the surrender of the Japanese Empire in 1945. It is expected to film at historical locations in the Chinese provinces of Beijing, Tianjin, Hubei, Hebei, Shandong, Shanxi, Heilongjiang, Liaoning, Shanghai, Jiangsu, Zhejiang, Chongqing, and Yunnan. It will also be exploring locations in Australia, Germany, and Japan.

Zhang Lu portrays the young Puyi, the last Emperor of China. After the fall of the Qing Dynasty and his abdication in 1912, Puyi was declared the Emperor in the puppet state of Manchukuo in the early 1930s. Liu Xuan portrays Empress Wanrong, Puyi’s wife. Michelle Ye portrays Yoshiko Kawashima, a Japan-raised Manchu princess who served as a spy for the Japanese Kwantung Army. Japanese actress Ryoko Nakano (中野良子) is also confirmed to star in the series, portraying the mother-in-law of Chi Buzhou.

Director Lu Qi (路奇) took great considerations when choosing the cast for the series, and while he expects his cast to deliver outstanding performances, he admitted that he lowered his expectations for Liu Xuan, a retired Olympian gymnast. “I chose Liu Xuan for her dignified image and popularity. I did not expect to see great things from her acting. However, in these past months of working together, she has exceeded my expectations and has given me great surprises.” He continued, “I’ve worked with many professional actors before and a lot of them have their own trademark performances. Liu Xuan, however, uses genuine expressions. Using such direct and simple acting performances can really touch the audience.”

Liu Xuan will have several intimate performances with Zhang Lu, and when asked if she had warned her husband about the scenes, she laughed, “He knows about them already. We are all very professional. There won’t be any hindrances.”

To prepare for her role as Empress Wanrong, Liu Xuan watched Joan Chen’s (陳冲) performance in the biopic The Last Emperor. She remarked that Wanrong was a very tragic woman – she married the emperor at only 16 years old and had to flee the empire in fear before she even turned 18 years old.

Michelle Ye Accused For Being a Diva

Michelle Ye was late to the set several days ago, when a large-scale scene involving several of the drama’s main cast was being filmed. Michelle was several hours late, missing out two run-rehearsals with the cast. In an interview, the director complained about the cold and was worried about cast members who had to wait for Michelle in the cold.

When the media was about to accuse Michelle for acting like a diva, she appeared on set looking ill. Coughing, she apologized and clarified that she had fallen sick.