Michelle Ye (葉璇), who has a large fan base thanks to her down-to-earth personality, often updates fans on the Chinese video-sharing website, Bilibili. She generously shares hot topics surrounding her life in the short clips that she posts.

In a recent video, Michelle took a trip down memory lane as she recalled her filming experience with Myolie Wu (胡杏兒) during Lost in the Chamber of Love <西廂奇緣>. Since the two really liked Edison Chen‘s (陳冠希) music during that time, they would go to karaoke after their long filming hours to sing all of Edison’s songs. Michelle expressed how much she and Myolie used to idolize the singer. 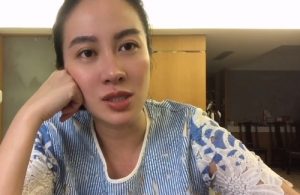 From this realization, she conceptualized that those with poor acting abilities will rely on their interpersonal skills, whereas those with personality tend to be savvy in their art. She said, “Acting isn’t acting; it is the ability to bring your true self and investment. Everyone has their own perspective, including the cameras, directors, crew, and audience, so it is important to show the real you to better your acting.”