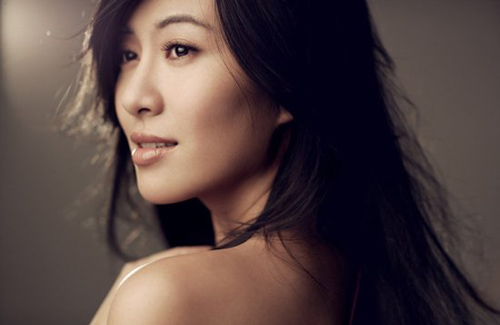 Michelle Ye (葉璇) has broken the boundaries of a traditional entertainment career, rising from pageant queen to proud owner of a production studio in a little over a decade. Her most talked-about investment, Loved in the Purple <紫釵奇緣>, recently made its Hong Kong debut on TVB Jade. While some call this Michelle’s triumphant return to the home station that started it all, the 33-year-old believes that TVB is just one of many valuable rest stops that led her to today’s successful career.

Born in Hangzhou, China, Michelle remained in mainland until her parents’ divorce and immigrated to the United States when she was ten years old. A strong and independent spirit, Michelle was already living on her own before turning sixteen. Reflecting on her childhood, Michelle believes that her parents had a hand in shaping her perfectionist tendencies. “Since I began going to school, my parents had always wanted me to be number one in the class. Over time, I developed very high standards for myself as well. My philosophy is to do my absolute best in everything, no matter how small or insignificant it is. I am only able to take my current step because of this way of thinking….”

At 19, Michelle won the title of Miss Chinese International and officially entered the entertainment industry. She agrees that TVB gave her many valuable learning experiences, and is grateful for the opportunity. “TVB is my mentor. TVB helped plant the seeds of much of my knowledge about films and television. My current collaboration with them is a form of repayment for their kindness.”

After starring in several popular productions, Michelle left TVB in 2005 to pursue a career in film and in mainland. She believes that taking the right opportunities has definitely pushed her career along. “The opportunity came, and I took it. I switched from TVB to Media Asia to make movies only because Wong Jing (王晶) and Peter Lam (林建岳) reached out to me. TVB’s executives were also very supportive, so I went. As far as going to mainland, I have always been a mainlander so returning to China is a very logical step.”

Despite being a successful actress, Michelle struggled with the limitations of her occupation and wished for more responsibilities. She eventually branched out into production, starting her own production studio while also acting as vice president and chairwoman of several prominent film and media associations in mainland. Michelle finds a new sense of joy working behind the scenes, and hopes to use her new role as a platform to ignite social change. “Since I entered the industry, I never thought being an actor is all that great. Actors have very limited powers when it comes to motivating change in this industry. The ones who truly hold this power are the producers and publishers. I want to do things that can influence others as well as myself. When the audience watch our dramas, they will at the very least gain some insights about their views on life. To be honest, I am already able to comfortably provide for myself and my family just by being an actor. However, I haven’t truly lived until I have experienced all the ups and downs of life.”