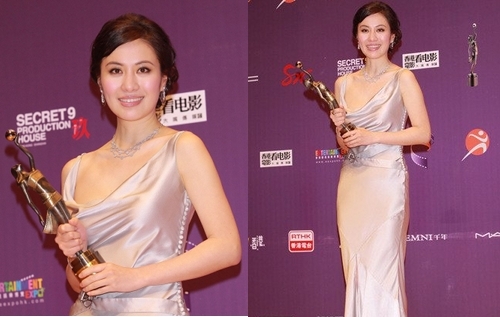 Michelle Ye Suen received the Best Supporting Actress Award at the 2010 Hong Kong Film Awards (HKFA) for her performance in Accident. Before even reaching the stage, tears started streaming down her face. She hugged Accident’s director, Cheng Bo Shui.

Michelle reminisced tearfully, “I have a Director friend who once told me, ‘Michelle, no one will ever cast you as a female lead [in movies]!’ This comment made me feel very hopeless at the time. However, the Hong Kong Film Awards recognizes every role, whether it is the lead, supporting, or minor characters.”

In addition, Michelle thanked the cast and crew of Accident. She also thanked Johnnie To, who insisted on casting Michelle in many of his movies. Michelle was also grateful for TVB, where she trained herself as an actress. Everyone applauded loudly and cheered and award presenter, Miriam Yeung Chin Wah, could not stop laughing [at Michelle’s earnest].

Finally, Michelle thanked her Accident co-star, Louis Koo Tin Lok. “I have to thank my good friend, Louis Koo. His remarkable acting led many to notice this film. Although he did not receive any awards tonight, but I see you.”

Backstage, Michelle’s emotions grew calmer. She said she did not have any post-award celebrations planned, as receiving the Best Supporting Actress Award was a surprise. “When I first started filming movies, many people questioned my abilities. I am most grateful to Johnnie To and Louis Koo. Unfortunately, they are both not present tonight. Receiving the Award tonight provided a tremendous boost and source of support. No matter what the role is, being cast is already a blessing.”

Thirty-year-old Michelle entered the entertainment industry by winning the 1999 Miss Chinese International crown. Since leaving TVB, she was cast in many important supporting roles. In 2005, she was nominated as Best New Performer at the Hong Kong Film Awards for her performance in Moonlight in Tokyo.

Jayne: This is a remarkable achievement for Michelle Ye. Congratulations for her Best Supporting Actress Award. Many people questioned Michelle’s decision to leave TVB (which is a safety net for many actors compared to the film industry) in 2005. But she made many strides in broadening her contacts among film directors, the Hong Kong elite etc. since the days of TVB.

Michelle Ye comes across as a very ambitious woman. She was not satisfied with just filming for TVB, but rather chose to enter uncharted territory in mainland China and Hong Kong instead. In several ways, Fala Chen’s ambitions remind me of Michelle.