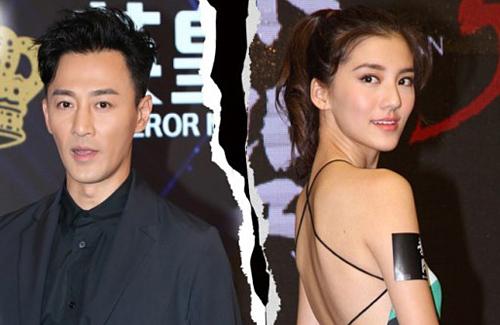 Months after their breakup rumors, Raymond Lam (林峯) and Karena Ng (吳千語) finally spoke about their split publicly. Currently linked with model Carina Zhang (張馨月), Raymond decided it was time to put speculations about his past relationship with Karena to rest.

Raymond said, “Actually, Karena and I have broken up for some time. Give me some space and let my dating life flow naturally. I’ll focus on my work.”

While dating Karena for five years, Raymond admitted that he had slowed down his career, so now it is time to work harder and pick up the momentum again. He will be filming three movies and a television drama in Mainland China this year.

Last week, Raymond and 28-year-old Mainland model Carina Zhang were spotted at a theme park. Asked by reporters if he is dating Carina, Raymond remained discrete, “Thanks everyone for your concern. I won’t say anymore because then the reports won’t stop.”

Although it was rumored that Karena’s involvement with businessman, Brian Shi (施伯雄) prompted her  breakup with Raymond last year, the trio never directly confirmed the reports. Filming in Mainland China, Karena had managed to dodge the press’ inquiries.

Speaking openly about her split with Raymond for the first time, Karena wrote on her social media account today, “Thanks everyone for your concern and support. Please forgive me in using social media to make my one-time response. For five years, I was fully immersed in my relationship. It is really not easy to let go. Everyone, please give me space to adjust. I will face the future bravely. Hope everyone will continue to support me and pay attention to my work.”

3 comments to Months After Breakup, Raymond Lam and Karena Ng Finally Open Up