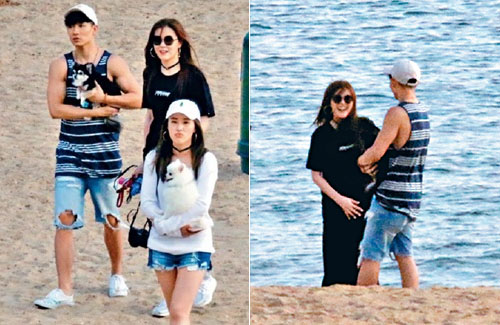 A Fist Within Four Walls <城寨英雄> star Moon Lau (劉佩玥) and The Voice <超級巨星> star Adrian Chau (周志文) have been seeing each other quite often lately, leading to speculations of dating by gossip magazines. A source leaked to a magazine outlet that the two of them recently took a trip to Shanghai together, and when they returned to Hong Kong, Moon went to support Adrian at his all-male basketball game.

The magazine first caught wind of their alleged relationship after realizing that the two of them have been leaving many comments on each other’s Instagram post. After Moon shared a rather upsetting post on IG, Adrian and Jeannie Chan (陳瀅) visited Moon at her home; Adrian cheered Moon up by playing with Jeannie’s pet dog. The following day, the trio went out together for a hiking trip.

According to a source, the trio had previously went to Shanghai together in April. After returning to Hong Kong, Moon went to support Adrian at his all-male basketball game with his friends.

As for these dating speculations, both Moon and Adrian have stepped out to deny them. Moon first clarified that it was Daniel Chau (周志康), Adrian’s younger twin brother, who went out with her and Jeannie that day. “Even Jeannie can’t tell them apart! It’s funny!” As for her alleged relationship with Adrian, Moon said, “We’ve always been very close friends. We always go out to eat, play music, sing, and we have many mutual friends. We’ve been friends for so many years, and very close. We haven’t thought about anything more.”

A few days ago, Moon shared on IG that she had injured herself while learning how to ride a motorcycle for her new drama. Adrian then referred Moon to a bonesetter. Asking if Adrian had accompanied her to the hospital, she said, “Whether it’s him or Jeannie, I’m happy to have friends with me!” (Will there be a possibility to turn your friendship into a romance?) “I haven’t dated in a long time! Dating and marriage is still very far away from me. I need to take care of my family.” (Why not have your boyfriend take care of you?) “I can’t have him do that. I like taking care of myself.” (Is Adrian your type?) “He’s a very considerate friend, but I haven’t thought more.”

Adrian echoed Moon’s sentiments, saying that he too haven’t thought about being more than just friends with Moon. “We’ve known each other for four years. She’s a good girl, and very kind, but I never thought about pursuing her.” He clarified that he’s never been to Moon’s house before, and said that their trip to Shanghai was with a group of friends. “We always go on trips with our friends together. There’s nothing strange about that!”