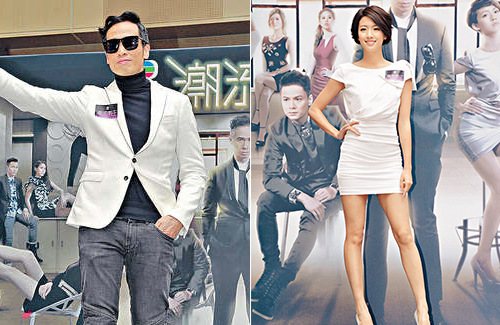 The cast of TVB’s upcoming drama Fashion War <潮流教主> held a promotional event this past weekend. True to his character, “trendsetter” Moses Chan (陳豪) wore a sophisticated white jacket while escorting costars Sisley Choi (蔡思貝) and Jeannie Chan (陳瀅) down the catwalk like in a runway show.

Fashion War, set in the modern Hong Kong fashion industry, stars Sisley Choi as Yan, a college graduate who lands a job as an assistant to MODES chief editor Yip Long, played by Moses Chan. Under the mentorship of Long, Yan learns how to navigate through office politics while working her way to become the industry’s top fashion editor.

At the series promo, Moses emphasized the importance of word-of-mouth over viewership ratings. However, he said he is confidant that Fashion War would be a success, expressing that the drama’s topic is refreshing and bold. He added that the younger cast—which features relatively newer actors—gives the drama a unique new look.

“I’ve said before that new collaborations produce new fireworks, and I still stand by that,” said Moses. “The audience needs to see something new every once in a while.”

In addition to the refreshing cast, Fashion War also provides a refreshing story setup. Despite being the lead actor, Moses said his character, Yip Long, does not have a romantic side-story. He pointed out that this could be the producer’s [Dave Fong 方駿釗] style.

Sisley also said she does not have a love line in the series. Her character Yan shares a familial bond with her mentor Yip Long, and has a platonic relationship instead of a romantic one with fashion editor Francis, played by Him Law (羅仲謙).

Moses Will Not Reveal Sex of Baby

Moses’ wife, actress Aimee Chan (陳茵微), is currently pregnant with their third child. The couple have two sons, Aiden and Nathan. When asked if they have already determined the sex of their baby, Moses said, “We know, but we will not announce it. We’ll wait until it’s born.”

Aimee is expected to deliver in May. Moses said he would be busy shooting You Who Came From the Meow Meow Star <來自喵喵星的妳>, which stars Kristal Tin (田蕊妮) and Nancy Wu (胡定欣), during that time, but would try his best to make time for Aimee.

7 comments to Moses Chan Promotes “Fashion War”, Will Not Reveal Sex of Baby