Nancy Wu Did 95% of Action Stunts in “The Unholy Alliance” 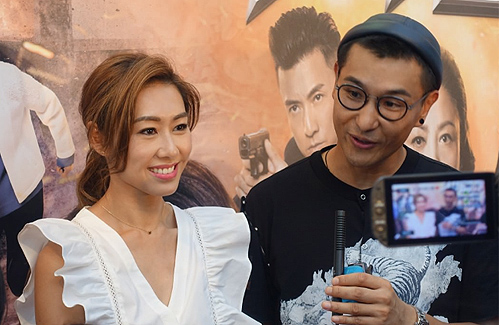 After the first few episodes, many viewers already started comparing The Unholy Alliance to last year’s hit series A Fist Within Four Walls <城寨英雄>, which also starred Nancy and Ruco. Agreeing that there are similarities in both her characters, Nancy said her role this time is definitely the modern-day version of Tiu Lan.

With barely any fighting knowledge, Nancy started from the basics and specifically took lessons in order to train for her role. In one of last week’s episodes, Nancy spoke about how she had to use makeup to cover up all the bruises she accumulated from filming. Nancy said, “Unfortunately, the makeup washed away when I went into water. However, at least the bruises proves that I was in an action film.”

Minimizing the use of a stunt double, Nancy added, “I can honestly say that in The Unholy Alliance, I did around 95 percent of the action scenes myself. There were a couple of action scenes that did not go very smoothly. During those times, I felt slightly disheartened and discouraged.”

As someone who loves to learn new things, Nancy feels as though she still has room for improvement in the future and expressed that she thoroughly enjoys taking on fresh challenges.

No Awkwardness With Ruco Although dating rumors sparked after working on A Fist Within Four Walls last year, Nancy and Ruco never admitted to having started a relationship. In March, Ruco was revealed to dating ex-Miss Hong Kong contestant Phoebe Sin (單文柔).

Emphasizing that she is only friends with Ruco, Nancy once again said there was no awkwardness on working with him. Nancy sighed, “Everyone needs to stop discussing this. Perhaps this is worthy news to the media but if everyone wants to know the truth, I’ve already said it before. My answer is the same every time. Are you saying that you’ll only be happy if I feel awkward? I put in a lot of effort and hard work in filming the series and I hope everyone will focus on the show instead.”