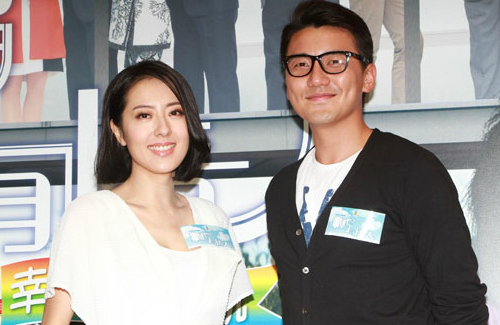 TVB actress Natalie Tong (唐詩詠) has experienced a bumpy relationship with Amigo Choi (崔建邦) in the past, tolerating his cheating behavior throughout the years when they had been dating. It was not until he was rumored to possibly have a flash marriage with an 18-year-old Mainland Chinese model that Natalie lost all faith in him.

In 2014, Natalie’s Rear Mirror <載得有情人> costar Tony Hung (洪永城) openly pursued her and showed his affection. Since then, although the two were spotted on several dates together, Natalie never admitted to their relationship and always referred to him as a friend. Hurt from the past, she reportedly became very cautious and prefers to observe men for a period of time before fully devoting herself in a new relationship. Although Tony and Natalie have been together for quite a while, he is reportedly still in her observation phase.

Tabloids claim that Natalie is still keeping her options open. A few days ago, she was spotted dining out in Sai Kung with Sammy Shum (沈震軒) late at night. Although far away from the city center, Sammy constantly checked around him for possible signs of lingering reporters. Sammy and Natalie were engaged in their conversation and they both returned home in good moods. Meanwhile, Tony was away on a business trip in North Korea to film for a travel show.