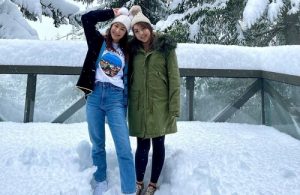 Known as a filial granddaughter, 31-year-old Jeannie Chan(陳瀅) takes yearly trips to Canada to visit her family, and this year is no different despite the pandemic. She was able to spend Christmas and the New Year with her loved ones after going through quarantine and multiple tests. Enjoying her time in Canada, Jeannie recently uploaded a photo of herself and her older sister, Ling, wearing warm beanies amidst a blanket of snow. The Chan sisters received many compliments online for their natural beauty.

After appearing in Jeannie’s photo, Ling gained a lot of popularity with over 2,000 followers on Instagram, as many netizens wanted to see her other photos since she looks mixed. Even though she looks very young in her pictures, it turns out she already got married in 2013 and even has a 1-year-old son named Nathan. 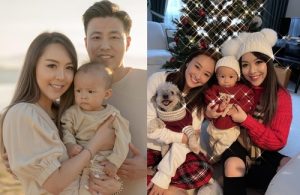 She mostly shares photos of her marriage and family lifestyle, and netizens discovered from one photo that Ling is an accountant who quickly returned to work last year after giving birth in 2019. She confessed in a post that she sometimes missed out on watching her son grow up, given her busy work schedule. However, she hopes to be a working mother who can successfully balance work and personal life.

Ling also occasionally posts some swimsuit photos that reveal her great body. Though she possesses beautiful looks like her sister, she didn’t have the same dream of becoming an actress. Nevertheless, she has a strong sisterly bond with Jeannie, given their love for makeup and shopping. 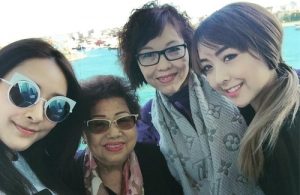 Jeannie grew up in Vancouver with one older sister and a younger half-brother. She graduated with a Bachelor’s degree in Business Administration from the University of British Columbia. She then returned to Hong Kong to become a model before beginning her acting career with TVB and now Shaw Brothers.