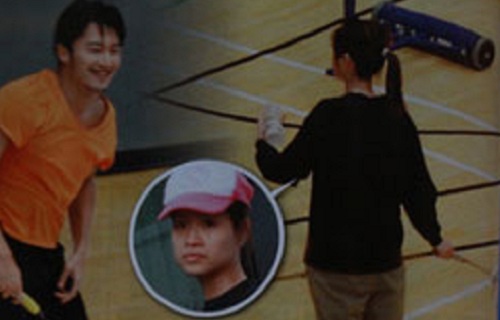 Officially divorced from Cecilia Cheung (张栢芝), Nicholas Tse (谢霆锋) was suspected to have a new girlfriend! Nicholas was spotted playing badminton with a mysterious 25-year-old woman at a gymnasium on May 25th. Nicholas appeared carefree and laughed heartily while accompanied by the slender, long-haired woman.

According to Hong Kong tabloids, Nicholas and the mysterious woman played badminton for 2 hours at a gymnasium in the Stanley district. Wearing a bright orange shirt and black shorts, Nicholas worked up a good sweat while swinging his racquet. At approximately 5 PM, Nicholas drove the woman home in the Wan Chai district.

Afterward, Nicholas headed to Cecilia Cheung’s house to eat dinner with his sons, Lucas and Quintus. One day earlier, Cecilia had flown to France to attend the 65th Annual Cannes Film Festival.

Last August, in the midst of his divorce crisis with Cecilia, Nicholas had professed that he loved her very much. However, the pair did not know how to resolve their marital differences. With their divorce filing officially approved by the court in May, Nicholas has resumed his single status. The 32-year-old divorced father recently declared, “I still believe in love. I believe that in the end, someone will be willing to accompany me!”

Nicholas Tse’s father, Patrick Tse (谢贤) was asked to comment about his son playing badminton with his female companion. Patrick said, “This is very normal; playing badminton is not anything special!” Patrick did not elaborate further on who the woman was.

Patrick revealed that he had attended his grandson, Quintus’ second birthday celebration in early May. Asked if he had sent any birthday gifts to his former daughter-in-law, Cecilia Cheung, for her 32nd birthday, Patrick claimed, “I did not know where she was! I only found out that she was at the Cannes Film Festival from the newspapers!”

On May 29th, Cecilia Cheung returned to Hong Kong after promoting her new movie, Dangerous Liasons <危險關係> at the Cannes Film Festival. Falling sick, Cecilia wore a mask at the airpot. When asked what her birthday wish was, Cecilia said that she wished to recover from her sickness first. Asked if Nicholas had sent her any birthday greetings, Cecilia did not wish to comment further on her ex-husband.

Jayne: It is a matter of time before Nicholas and Cecilia finds romantic partners. It will be interesting to see who they will date next.

23 comments to Nicholas Tse Has a New 25-Year-Old Girlfriend?