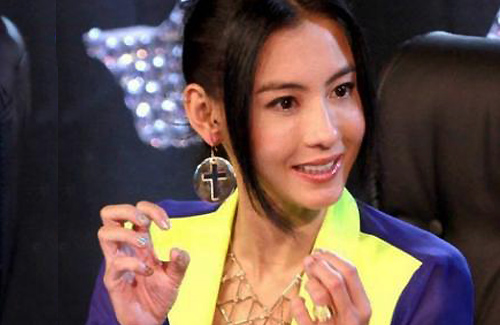 Three years after his divorce with Cecilia Cheung (張栢芝), Nicholas Tse (謝霆鋒) has finally moved past the hurt of a failed marriage. He found solace in former lover, Faye Wong (王菲), whom he was unable to forget despite their breakup 11 years ago. While many congratulated the reunited lovers, Cecilia is holding a grudge against her ex-husband for spending little time with their two sons, Lucas and Quintus.

Cecilia told China Star Entertainment’s Tiffany Chan (陳嵐) that Nicholas rarely visited the two boys this year. He also made a disappearing act on his 34th birthday in August and did not celebrate the occasion with his sons. Since he always said he was too busy, Cecilia felt that Nicholas was an irresponsible father and said that he was not worthy of her love anymore.

Customary of his stoic nature, Nicholas did not make any responses towards Cecilia’s remarks. However, his manager, Mani Fok (霍汶希) explained, “Nicholas is working so hard because he is trying to prepare for the future. He hopes to earn more money for his two sons.”

Nicholas Spent His Birthday at Work

Nicholas also spent nearly six months filming food travelogue, Chef Nic <十二道鋒味>, which required traveling to locations all over the globe. For his birthday, Nicholas was originally slated to take a long rest since he was showing signs of arthritis. Mani explained that he was called in last minute to film for Chef Nic and missed celebrating with his two sons, “When he realized that the vendor in Chengdu could not film on another date, Nicholas resumed work.”

While Mani understood Cecilia’s wish for Nicholas to be more involved with their sons, she felt that it was time for Cecilia to let go of grudges once a relationship is over. Mani said, “I hope Cecilia learns to let go in her heart. If she is happy, it’s also better for her sons. When a mother is happy, children can grow up in a healthy environment. [Only this way] can she welcome another significant other.”

Suffering from acute gastroenteritis while filming Mainland reality show, She’s My Family <明星到我家>, Cecilia has been discharged from the hospital and returned to the comfort of her sons in Singapore.