Niki Chow Has Good Things to Say About “Threshold Again” 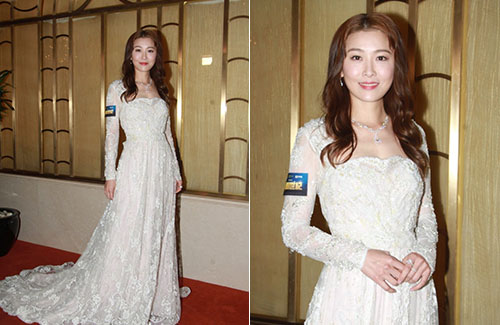 It’s been a while since Niki Chow (周麗淇) has graced TVB’s screens. Last night, the 38-year-old was spotted filming a scene for TVB’s Threshold Again <再創世紀> at a hotel in Tsim Sha Tsui. The Sergeant Tabloid <女警愛作戰> star wore an elegant white gown, reminiscent of a bridal dress, and filmed a scene with costars Benjamin Yuen (袁偉豪) and Frankie Lam (林文龍). Niki shared with reporters that she and Benjamin play a couple, but the two would not have any intimate scenes. When speaking about her role, Niki said she plays an “ordinary girl who becomes an elite in the business world. It is a role where viewers would be growing along with me.” Niki added that she is happy for the chance to take part in the drama, and finds that Threshold Again to be a production “with sincerity.”

Threshold Again is the sister production to TVB’s 1999 epic At the Threshold of an Era <創世紀>, which was produced in celebration of the new millennium. The drama had over 100 episodes and was released in two parts. It starred Gallen Lo (羅嘉良), Roger Kwok (郭晉安), and Sunny Chan (陳錦鴻) as three entrepreneurs who dream of developing a pollution-free system for the city. Louis Koo (古天樂), Kenix Kwok (郭可盈), Liza Wang (汪明荃), Ada Choi (蔡少芬), Flora Chan (陳慧珊), Nicky Wu (吳奇隆), Maggie Shiu (邵美琪), and Paul Chun (秦沛) co-starred. The story spanned 20 years.