When Niki Chow (周勵淇)  unexpectedly announced her marriage to Mainland Chinese actor Fu Yiming (傅浤鳴) last month, there were many rumors that Niki was a homewrecker or she was pregnant. Appearing in a promotional event, Niki responded spoke about her marriage and revealed that her husband will live in Hong Kong to accommodate her career.

Denies Being a Homewrecker 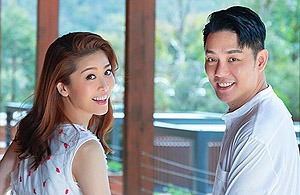 Due to the close timing in Yiming’s involvement with Niki and when he ended his 20-year-marriage with actress Cheng Hao (程愫), Niki was rumored to be the reason for the pair’s divorce. But Niki shared that she and Yiming started dating three months after his divorce, and emphasized that she was not a homewrecker.

Niki disclosed that she dated for a year before marriage. Although the public thought that Niki’s marriage happened too fast, she and her husband felt it was the right time, “I liked him and we clicked. We felt comfortable, so it was okay.”

Although Niki was saddened that netizens gossiped about her and her husband, Niki admitted that she can’t control what people say, “I didn’t tell the public when I dated and only announced when I got married. When my husband spoke up for me, I told him to not be so frustrated.”

In keeping a low profile, Niki didn’t give many details of their wedding and said she did not want another banquet in Hong Kong, “My marriage took place overseas. I wanted to be low profile and have some privacy.”

Baby on the Way?

Although 39 years old, the actress does not believe that her age should be a reason for rushing  pregnancy. Although she stated she is currently not pregnant, Niki wants to enjoy marriage life first. She will did not consider cryoperserving her eggs and will continue to take care of her body.

When reporters implied that Niki did not want to have children because Fu Yiming had a son from his previous marriage, Niki responded that she did not mind being a stepmom.

Niki shared on social media that she is expecting her first baby.