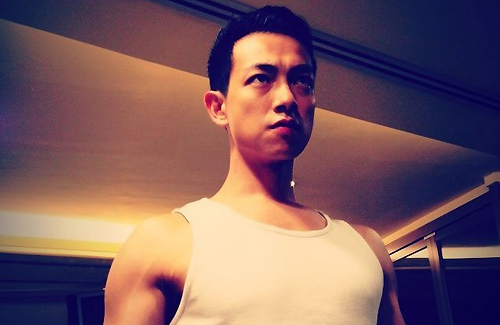 The star-studded game show will feature all popular games from previous installments, including the ever-popular wasabi-filled sushi eating game and kissing games.

The press leaked that Lawrence Ng (吳啟華), Oscar Leung (梁烈唯), Chrissie Chau (周秀娜), Kitty Yuen (阮小儀), and Alice Chan (陳煒), among others, showed up at TVB Studios yesterday to shoot an episode of Super Trio Maximus. Oscar Leung suffered through the wasabi sushi game and had to beg Eric to “relieve him from the pain” when it came to eating his third wasabi-filled sushi. Chrissie Chau also “embarrassingly” lost in a hula-hooping competition against Kitty Yuen.

When it came to the game of truth, Alice Chan admitted to two-timing a former boyfriend. The father of one daughter, Lawrence Ng , also admitted to two-timing before, but refused to reveal when he committed the heinous act. Eric Tsang  then said, “It’s not the first day I’ve met you. You at least tried six-timing before. Come on, how many [victims]?” Lawrence smiled awkwardly and clarified that he began dating another before officially calling it off with another girlfriend.

Oscar, on the other hand, admitted that he had two drunken one-night stand experiences. “I vaguely remember them. The first time was when I was 21. When you are at the ripe age of 21, you tend to be pretty crazy with the partying. They treated me like a little sheep and offered to drive me home because I was drunk. Before I left they gave me a drink and told me that I would be more clear-minded if I drank it. Of course, they spiked the drink and the rest was… well, I do not wish to elaborate on such shameful things.”

Lawrence, who had publicly expressed his love for Ada Choi (蔡少芬) years earlier, was asked if he also had a similar night experience with his colleagues. He immediately said, “I get really into [the acting] and I do fall in love with my costar, but that’s only with the role. Ada Choi is a strong woman. How would I like her?”