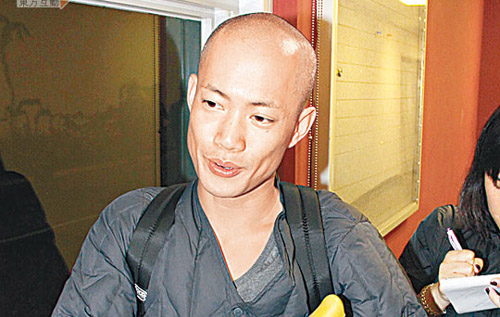 On his day off yesterday, Pierre Ngo (敖嘉年)injured his hand while assembling a cabinet. Immediately, the fourth finger on his right hand started bleeding profusely. Accompanied by his family, Pierre went to the hospital. In a telephone interview, Pierre revealed that he stayed at the hospital overnight and received several stitches. He has returned home and will follow-up on his hand injury later.
Pierre said, “This year, I have been frequenting the hospital. When I filmed Flying Tigers <飛虎> earlier, I had a knee injury. I have to pray to the gods more!” (Was the wound deep?) “The wound was quite deep, thus I was afraid to neglect the injury and went to the hospital immediately.”
Asked whether the injury would affect his work, Pierre said, “My work will not be particularly affected. I am currently on vacation and will not film a series until August. Fortunately, I am ambidextrous and can use both my left and right hands! I use my right hand for writing and holding chopsticks. When I play ball, I use my left hand, so the impact of the injury was not too bad.”
Source: Orientaldaily.on.cc
Jayne: Why is a good actor such as Pierre left with a long break between filming series?

5 comments to Pierre Ngo Enters Hospital Due To Hand Injury