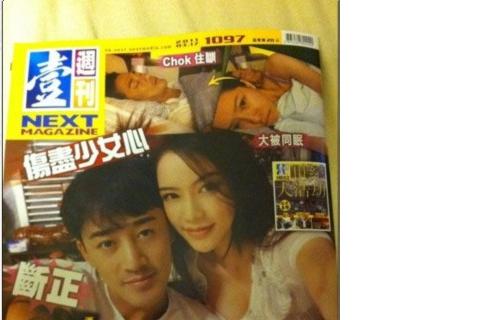 In the latest issue of Next Magazine, bed photos of Raymond Lam Fung and ex-girlfriend, Mavis Pan Shuangshuang, were exposed. From the camera angle, it appears that Mavis took the photos while Raymond was sleeping. The bed photos created a stir in Hong Kong and hurt Raymond’s feelings deeply. When reporters confronted Raymond about the photos, he admitted that he was previously engaged in a serious relationship with Mavis. At the Return to the Three Kingdoms <回到三國>costume fitting yesterday, Raymond admitted that he and Mavis had dated for several months. They met on the film set of The Jade and the Pearl <翡翠明珠> last year. At the time, Raymond was quite serious about the relationship; the pair even met each other’s parents. Due to differences in their personalities and Raymond’s hectic schedule, resulting in little time spent together, the pair agreed to separate amicably. Since their break-up, they have not maintained contact.

Reflecting on his past relationship with Mavis, Raymond’s eyes brimmed with tears. He indicated that the bed photos scandal hurt him the most since entering the entertainment industry. Raymond stated that he was unaware that photographs were taken while he slept. In regards to future relationships, Raymond will let fate determine its course and will not purposely avoid them.

Since Raymond and Mavis were very discrete in handling their romance, Raymond’s former co-stars, Charlene Choi and Miriam Yeung Chin Wah, were unaware of his past relationship. On the set of The Jade and the Pearl, Raymond and Mavis maintained their distance. Regarding the surfacing of Raymond’s bed photos, Charlene felt that Raymond had trusted the wrong person, alluding that Mavis may have revealed the photos for publicity reasons.

Mavis Pan is a 24 year-old Taiwanese model and actress. Her voluptuous figure has earned her the nickname of “Little Shu Qi” in Taiwan. Mavis appeared in films, The Jade and the Pearl <翡翠明珠> and What Women Want <我知女人心>. She has appeared in numerous commercials as well. Compiled from Tom.com and the Sun

Jayne: I believe Raymond and Mavis’ bed photos first circulated on line. Netizens speculated that Raymond Lam was the man in the photo due to the striking resemblance. Next Magazine then published the photos.

Who you trust can come back to haunt you, especially if you are a big star like Raymond Lam, where association of any sort will mean instant fame. Raymond sounded very hurt because he had trusted Mavis. He said he never knew that photos were taken while he slept. The intention of Mavis leaking the photos was only to achieve fame. It’s an exploitation of her past relationship with Raymond. I think Charlene Choi was correct in her blunt statement that he had trusted the wrong person.