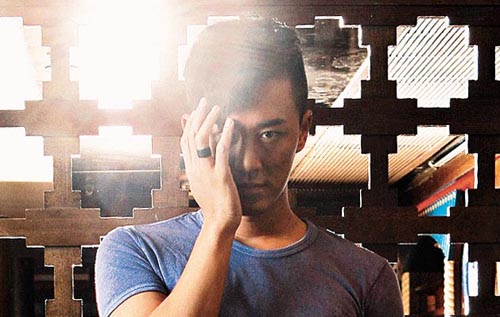 Over the past six months, a thousand arrows pierced Raymond Lam’s (林峯) heart, due to the release of intimate photos with ex-girlfriend, Mavis Pan (潘霜霜). Since the first series of bed photos circulated, the night before the publication of the weekly tabloids, Raymond waited for his “death” from a ticking time-bomb. The countdown led to a complex emotional mix of fear, loss, panic, and ugliness….

Aside from filming television series, Raymond became very insular during the photo scandal. He suffered insomnia, cried tormentingly, and turned to alcohol. “Reflecting back to that point in time, in fact, I do not know how I passed the time.” Today’s Raymond laughed over the matter.

After dying, Raymond came back to life. His family and the company’s support made Raymond not give up. With his fire burning again, Raymond continued to appear “chok” in his recent Hong Kong Coliseum concert. In private, he acquired a phobia to taking photos, similar to delusional disorder victims. Did the mention of Mavis Pan’s name equate to having a nightmare? Raymond replied, “No, they are a part of my memories.” Raymond held no regrets and remorse in love.

Coming from a wealthy background, Raymond’s career was smooth in recent years, and became one of TVB’s chief promoted artists. He filmed series continuously and performed concerts at Hong Kong Coliseum for three consecutive years. He received the Most Popular Singer in the Asia-Pacific Region for two years. Raymond’s fortune made many actors drool. However, the unexpected outbreak of bed photos and Mavis Pan’s complaints over their relationship caused Raymond to lose face and dignity.

Mavis Pan was the first girlfriend that Raymond Lam publicly acknowledged over his 12-year career. Of course there was no other choice except for Raymond to admit his relationship with Mavis, given the release of their bed photos. However, the photo scandal was an unexpected storm. Raymond was filming Return to the Three Kingdoms <回到三國> at the time and cried over the photo scandal every day, causing him to become a puffy-eyed Zhuge Liang.

Recalling the bed photo scandal, Raymond occasionally heaved a long sigh, “It was an experience, a part of life.  Of course, there are sweet and bitter experiences in life. I was indeed very sad during those days. Aside from pouring my heart out to my manager, I did not know what else to do.  I hid myself away, which was quite autistic. Since I had to work every day and face the media and colleagues at work, I thought too much. What perspective did people look at me with? I worried too much. I had to also balance my work.

“Thinking on a deeper note, I was very fortunate to be filming Return to the Three Kingdoms at the time, forcing me to face the situation. The pressure was really high and there was no one to share them with. I can only cry–crying and drinking non-stop. I could not sleep at night and talked to my manager until dawn. However, I did not know what will happen next. Each day, I was very fearful. Thinking back, I do not know how I passed the time.”

When asked whether Raymond felt fearful or ashamed at the time, he noted, “I experienced all types of emotions.” Was Raymond afraid that fans will leave him? “All the emotions mixed together; it was very complicated.” Did Raymond feel that he died and came back to life? “I do not know how to describe it; I can not find the right words.”  Falling to his lowest pit, did Raymond consider leaving the entertainment industry? In fact, the thought did cross Raymond’s mind. “With life approaching this point, I did think of giving up because of fear. All along, I did not want the expectations of my ‘war buddies’ and people who love me to turn to disappointment. Each time, I will put in my best efforts.  However, suddenly this incident happened. How do I face them? I felt very guilty. ”

After dying, how did Raymond come back to life? Raymond’s eyes turned a bit red, “My family gave me wholehearted support from the heart. My younger brother and sister sent me messages, ‘No matter what happens, we will support you!’ Do you know how important this message was to me? I am very lucky to have fans who love me. My colleagues trusted me and my work, including Ms. Lok (TVB executive, Virginia Lok). I need this kind of support.”

Walking from heaven to hell, was Mavis Pan a nightmare for Raymond? He denied the allegation, “No, it is part of the memories of my life. We were happy when we were together.  I did not regret it and will not regret it later in life.” Revealing Raymond’s bad traits earlier, Mavis Pan may never let Raymond go. Raymond said he was and will never be angry at Mavis, “I’m not angry. I will not think about it anymore. I just want her to be well.”

Although once bitten by a snake, Raymond still needed to love. Raymond laughed, “I am scared, of course I am scared!”  Dating in the future, will he refuse to take photos? “When I go outside now, aside from taking photos with other people, I am even scared of the camera! When the opposite sex approaches me, my guard increases.” Do you have a phobia of the camera? “No, my entire team has a delusional disorder. Anything that comes across as suspicious or unnatural, we will mind.”

Allegedly, Raymond [felt] he was very handsome. “Of course I do not feel that way!” Before he finished his thought, the reporter asked whether the handsome Raymond had countless beautiful women throwing themselves at him when he traveled to mainland China? How would he handle the situation? “I will avoid it.” However, there were many hot women. “Then what?” The reporter stated that Raymond was a normal man. “If my work were abnormal, then I can not be a normal person.”  How did Raymond resist temptation? “I will stick by men instead!”

With his fear, will he avoid dating and remain single for the rest of his life? Raymond laughed, “I am quite happy now and easy to please! My love life is blank. I can achieve complete self-satisfaction through work. Playing with toys and computer games, as well as watching cartoons can also satisfy me.”

When Raymond went to nightclub, Volar, he was spotted with Kibby Lau (劉俐). “It’s not a big problem to go clubbing. At the time, we were talking to each other.” However, dating was wrong and with his grandmother’s recent death, it was also wrong to hang out at night. Raymond admitted, “Yes, thinking back, I should not have done that. That evening, we had just concluded a meeting and there was no way I could not go [to the nightclub with everyone]. We were all good brothers working on my music together. When they asked me to go clubbing, it was already around 2 AM, after we had already had a few round of drinks. I said I will just go say hello [at Volar]. Immediately, a large group of people appeared before my car when we arrived. How can I not go inside? ”

Since Raymond went to Volar to meet his male friends, how was this related to being spotted with Kibby Lau? “There were many people there that night.” To pick up women? Raymond maintained, “Of course not! There is no possibility [of further development with Kibby Lau]. We do not know each other that well.” Jayne: Why did Raymond have to feel so guilty about himself during the Mavis Pan photo scandal? Was he afraid that he disappointed everyone by his choice in girlfriend? Did Mavis’ racy photos make Raymond feel ashamed in dating her? He noted that he was very fearful during that time, lost sleep and afraid of what tabloids would write next.

Anyhow, Raymond appears to be a lot happier recently, especially after his Hong Kong Coliseum concert.