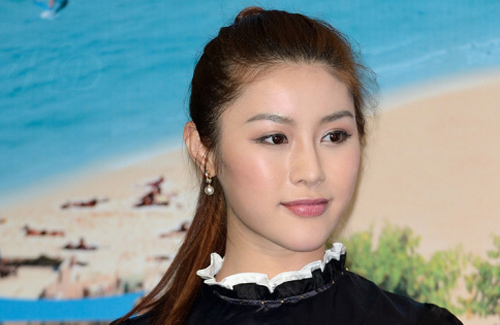 Despite being in the entertainment industry for more than five years, Kibby Lau (劉俐), who has always played cameo roles, did not receive much attention until recently, when she was allegedly involved in a sex scandal in Macau. The scandal has caused her so much grief that she had to be wheeled into the hospital for a consultation.

A few days ago, with the assistance of a male friend, Kibby went into a hospital for consultation. Kibby could not walk steadily and was eventually given a wheelchair. After the consultation which lasted about an hour, the male friend accompanied her to the taxi stand. While waiting for the taxi, Kibby discovered the presence of the media and she promptly put on a mask.

Photographs surfaced earier showing Kibby checking into a hotel with a middle-aged man and has allegedly pocketed $250,000 HKD for the transaction. Though Kibby had denied vehemently about her involvement, the damage caused by the report seemed to have taken a toll on her health. In a telephone interview with the press, Kibby explained, “My menstruation has caused me great pain. My tummy was so painful that a hot water bag could not take away the pain. I had to rely on hair dryer to keep my tummy warm. In the end, I decided to go and see the doctor. But the pain caused me to be dizzy then I had difficulty walking. When a nurse saw that, she gave me a wheelchair.”

When asked if she was reprimanded by TVB due to her scandalous affair, Kibby replied in the negative but she added that to protect her reputation, she has already sought her lawyer friends’ help to draft a legal statement proclaiming her innocence in the matter. Kibby said irritably, “In my statement, I will state clearly that the go-between does not exist. Also, time and place stated in the reports were all wrong! Even though my family supports and believes me, I still feel bad that my elder sister who is already 9 months pregnant needs to worry about me.” Kibby does not rule out the possibility of taking legal action against the tabloid for fabricating rumors.

In other related news, it was reported that Wilson Chin (钱国伟) is looking to film a movie about actresses who exchange sex for money, and has already chosen Kibby as one of the actresses. However, in a telephone interview, Wilson defended Kibby, “I don’t believe she will do that. Perhaps it’s just a normal social dinner,” and with regards to the movie, he added, “Rubbish! I only intend to film Lan Kwai Fong 3 <喜爱夜蒲 3> and the storyline has nothing to do with sex exchange.”