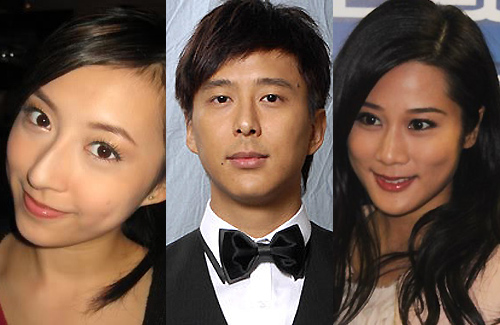 TVB artist, Patrick Tang (鄧健泓), may soon earn the title of “Mr. Player” with the rate his romantic rumors are going.

Last month, Katy Kung (龔嘉欣), announced that she has ended her two-year relationship with Patrick Tang. Immediately after her announcement, there were rumors stating that Katy was cheating on Patrick and dating Living Up <更上一層樓> cohost, 2009 Mr. Hong Kong Jack Hui (許家傑). However, with the recent sightings of Patrick with “the other woman” and reports of various women staying overnight at Patrick’s place when Katy was hard at work in China, it looks like Patrick was the one to blame.

On December 10, the paparazzi finally caught up with Patrick and the other woman. She turned out to be 2007 Miss Hong Kong, Kayi Cheung (張嘉兒). Like bloodhounds, a few reporters were staking out at Patrick’s apartment in Tsuen Wan since December 9. Patrick’s brand new Mini Cooper had been parked for more than a day and on the next evening, he and Kayi were caught leaving the apartment in the car, which led the media to believe the two had spent the night together.

The paparazzi immediately dashed up to the car and snapped a few photos. Patrick managed to pull off an embarrassing grin. Kayi’s makeup-less face was partially covered with a mask and a pair of glasses. She looked calm initially, but soon looked away from the cameras.

Apparently, Katy may have known that Kayi has been the other woman for a while. When shown the photos taken by the paparazzi, Katy immediately identified Kayi, and revealed that Patrick and Kayi were already close and the two were seen together during filming for Tiger Cubs <飛虎> back in mid-2011. As both were only minor characters in the show, Patrick and Kayi had free time while waiting for their scenes. Kayi spent a lot of time asking Patrick for help on the script, so it was not a surprise that the two developed more than a working relationship.

Thirty-eight-year-old Patrick has had a lack luster career as an actor. However, his love life has been extremely exciting. Though not an exceptionally handsome man, he managed to date several of his beautiful costars, such as Marsha Yuen (原子鏸) and Selena Li (李詩韻). Although Patrick is 16 years older than Katy, she had once believed that she found the love of her life.

Several months ago, after returning from filming War and Beauty 2 <金枝慾孽2> in Hengdian, Katy realized that her relationship with Partick was close to over. In tears, Katy allegedly told her close friends, Sarah Song (宋熙年) and Elaine Yiu (姚子羚) about Patrick and Kayi’s affair. The two advised her to leave Patrick, but Katy had a hard time telling her parents as they believed Patrick was a nice gentleman and a potential husband. However in the end, Katy reportedly had enough of Patrick’s affair with Kayi, and his brazen behavior of cheating on her with various women, including Kibby Lau (劉俐), while she was busy at work. Katy decided to pack and leave.

The story does not end there. According to Patrick’s neighbors, as soon as he became available and Kayi was ready to take over Katy’s role in Patrick’s life, the sexy Kibby Lau, popped up out of nowhere and has been spending several nights at Patrick’s apartment. It looks like Kayi may soon get a taste of her own medicine.