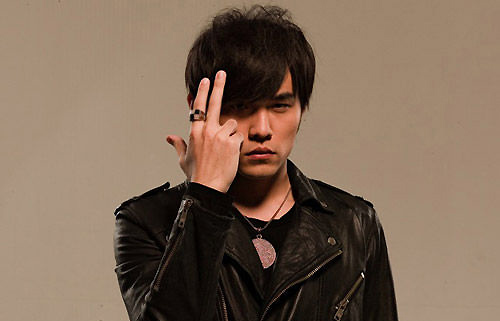 While Jay Chou (周杰倫) was in Hong Kong last week for his nine-session concert, 2013 Opus Jay World Tour <周杰倫魔天倫世界巡迴演唱會>, he did not forget to have a fun time. Jay held a party inside his hotel suite. Sexily dressed Kibby Lau (劉俐), Kelly Fu (傅嘉莉), Debbie Su (蘇子賢), and models attended, but Jay’s girlfriend, Hannah Quinlivan (昆凌) was not in sight.

Around 6:30 pm on September 18, Kibby was first seen inside the lobby of the Kowloon Harbour Plaza Metropolis Hotel where Jay was staying. Kibby wore mini denim shorts that revealed her lower bottom cheeks and she repeatedly re-applied her makeup. Not long after, she was joined by more models. Kibby, Kelly, Debbie and the other girls were seen going inside Jay’s hotel room.

Jay had allegedly chosen all girls to be invited to the party, while the other attendees were from his close circle of friends. Jay’s good friend, Shawn Yue (余文樂), was also spotted at the party.

According to some of the guests, the energy that night resembled that of an emperor choosing his concubine for the night, alluding that Jay was flirting with the women openly. Lobster, abalone, steak, and red wine were served to guests.

Asked about Jay’s party, Kelly Fu replied that she attended “to meet friends and say hello to work colleagues.” Kelly indicated that she met Jay many years ago while filming a commercial and they often met up with each other.

When contacted, Jay’s management company replied, “Jay knew the staff worked hard, so he organized a barbecue party to celebrate the Mid-Autumn Festival in advance on [September] 18. There were 50 t0 60 people who attended. In addition to the crew, there were a few people that [we did not know]. They were the family members or friends of the staff. The barbecue party was very public, and the staff thanked Jay for his hospitality. An intimate Mid-Autumn dinner was twisted by the tabloids into a ‘Concubine Choosing’; how absurd!”

Source: Next Magazine #1229 via ihktv.com