Since getting married in 2019, Raymond Lam (林峯 )and Carina Zhang (张馨月) have faced pressure and gossip over their relationship. With the couple currently starring in Chinese reality show Viva La Romance 5 <妻子的浪漫旅行 5>, Raymond confessed that Carina faced all sorts of criticism since they fell in love. 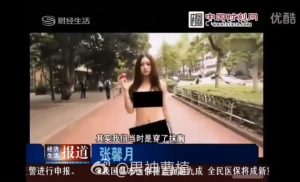 Before dating Raymond, Carina won first runner-up in a nationwide lingerie model contest in 2010. Working as a commercial model for years, Carina had filmed lingerie ads for TaoBao where she wore lingerie on a busy street in photo shoots.

When her relationship with Raymond was exposed, netizens dug up her lingerie photos and also accused her of plastic surgery. Many of Raymond’s fans felt that she was not worthy to date the actor.

However, Raymond sees Carina as a strong independent woman who worked to take care of herself. “To me, this is not some sort of dark secret past. I hope that everyone can use a more positive mindset when viewing other people,” he said in Viva La Romance 5.

As online comments became increasingly abusive, Raymond could no longer tolerate them anymore. “I’ve been in the industry for 20 years, and this issue made me the most angry and frustrated. I couldn’t handle having people yell at us every day for no reason.”

Criticizing online bullying for being too extreme, Raymond’s bottom line was tested when the comments continued to target Carina.  “Criticize me all you want! If you attack my family, you and I have a problem.” He disclosed that he had even opened a fake Weibo account to yell back at netizens!

Carina was unaware the Raymond argued with netizens, as he usually does not behave this way. She feels that other actors usually marry wives who are very beautiful and talented, thus many are questioning Raymond’s taste as Carina is just a normal woman. “I felt terrible after reading those comments, because I didn’t want others to say that about my husband. I was also afraid that I would affect his career, so I felt very guilty,” she cried tearfully.