Raymond Lam Transforms into a Black Bunny for Kiehl’s Shoot 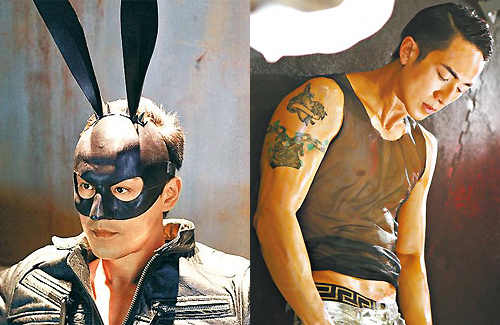 Above: Raymond Lam and Wu Chun in charity shoot.

Alex Fong and JJ Lin showcased their maturity through their posh attire, while Alex Lam lit up the cameras with his youthful charms. Wu Chun, Richie Jen, and Pakho Chau donned sexy images, and flaunted their muscles while wearing thin, transparent sleeveless shirts.

Hiding his face behind a black mask with long, extended bunny ears, Raymond Lam’s ambitious photo shoot made the most surprising appearance. Raymond also covered himself up with a tight, leather jacket. On his dark image, Raymond said, “I believe that a man is most charismatic when he is showcasing his most natural side. In this photo you can see me wearing high fashion, and it is able to present my most natural charisma.”

On his reasons for partaking in the shoot, Raymond said, “As an artist, we are able to influence others through our work and bring awareness to society. This is what we should do.”

Wu Chun flaunted his taut muscles and tattoo body for a good cause. His well-shaped body will have all his female fans salivating. Wu Chun felt at total ease as his photos were shot at his hometown in Brunei.

Richie Ren, on the other hand, put on a nose ring and with a wet body, said that “to be a charming man, one must have wisdom, character, responsibility and a loving heart and hopefully through these photos, it will appeal to more people doing charity.”

Alex Fong, almost 50, revealed his chest for this photo shoot. He said this made him reminisced his younger days, he felt like he was 20 years younger.

“It’s a bold new attempt, and very fun as well,” said JJ. “Charity should become a part of our lifestyle, and we should all greet our days with smiles because our world is too unpredictable. A simple action can affect a person’s entire life.”

Pakho said, “To be able to influence others through my work is something I’ve always wanted to do, and I hope I can do continue to do this in the future.”

The charity exhibition will be held at Harbour City in Tsim Sha Tsui from May 14 to 19. The organization aims to earn at least $700,000 HKD at the exhibition, and all of the proceeds will be donated to Josephine Siao’s (蕭芳芳) End Child Sexual Abuse Foundation. Josephine has always been very active with children’s charities and welfare in Hong Kong and thus founded the charity in 1999.

This article is written by Addy and Jennifer for JayneStars.com.