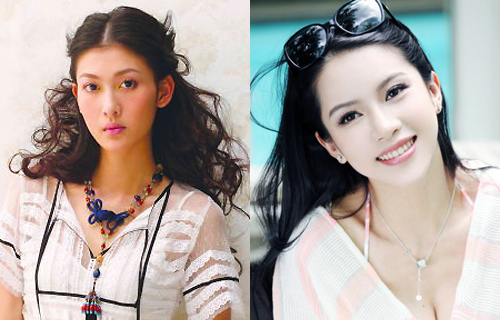 After the Hong Kong paparazzi’s recent slanderous reports against Karena Ng (吳千語) and her family, Raymond Lam (林峯) finally admitted that he has been dating the 19-year-old beauty. This came as a sudden 180 degree turn for Raymond, who maintained a lower profile in handling past relationships.

Rain Li— Dating after filming 2003 drama, Lofty Water, Verdant Bow <雲海玉弓緣>, Rain was considered as Raymond’s first girlfriend in the entertainment industry. Each time Raymond’s romantic news surfaced, Rain was asked to comment. Over Raymond’s acknowledgement that Karena is his girlfriend, Rain said, “I’m not shocked because Raymond has always been a person to bear responsibility. When we were dating in the past, we both considered admitting the relationship publicly. We were both newcomers at the time and our companies did not wish us to announce it. Times have changed now. Artists will announce their dating and wedding plans now. I’m happy for him and wish him the best.”

Mavis Pan— The leaking of Mavis’ bed photos with Raymond Lam in 2011 had stunned the public. Two years later, both Mavis and Raymond have found new lovers.  What does Mavis think of Raymond’s public announcement in dating Karena? Mavis said, “Isn’t it normal? Actually it doesn’t really pertain to me!” When prompted that Raymond did not declare Mavis as his girlfriend in the past, she replied, “It’s not the same then! He is already this age, he should have responsibility; otherwise which woman would be willing to be with him? At least, a woman should be given her status.” She added, “Without responsibility, he is not a man!”

Liu Yuqi stated that she had slept at Raymond’s apartment on several occasions, implying of their intimate relationship, which Raymond never acknowledged. Currently in mainland China, Liu Yuqi did not wish to comment on Raymond’s latest romance.

TVB executive, Virginia Lok (樂易玲) has shared the high and low points of Raymond’s career over the last decade, including helping him handle the stressful Mavis Pan scandal. Raymond is one of Ms. Lok’s favorite artists, yet he did not consult with her in advance and only told her after making his dating announcement.

Ms. Lok said, “He is a big boy. He should bear responsibility over his own actions. All these years, I have supported him each time he encountered setbacks. This is happy news; I will support him! If he feels the need to do something,  I will support him. As his senior and manager, I will give him unlimited support.”

Ms. Lok did not believe that Raymond’s announcement will endanger his work, as many TVB artists have gotten married and started a family.

Some members of the fan community on the other hand were much more vocal in protesting the couple’s relationship, unable to accept his new girlfriend.