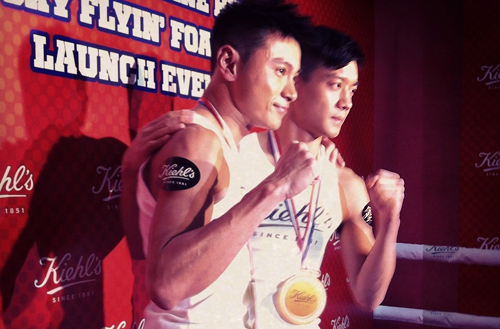 When Raymond Wong was asked for his thoughts on the scandals, he expressed that he is not very gossipy and did not know of them until someone told him. He said, “We are friends, but we rarely talk about our private lives. Even if they do end up talking about it, I would try to change the topic. I don’t want to be blamed when their privacy leaks to the public.”

Currently on a short break, Raymond revealed that he will perform in an upcoming event in mainland China. Since the aftermath of “Three Amorous Knights,” the Hong Kong media has been branding many busty mainland actresses as femme fatales, causing big headaches for male actors.

With his impending work scheduled in China, Raymond was asked if he was afraid. He laughed, “I haven’t come upon one yet so I don’t know how to be afraid! But when I go, I will try to get some advice from others… like Kevin Cheng (鄭嘉穎), for example. If no one is interested in him, then definitely no one will be interested in me!” Asked whether he believed in Kevin’s statement, Raymond said, “That’s what he said, so I trust him! He’s always working in China. I need to ask him for some advice to avoid these rumors!”

Ruco Chan Will Not Eat Alone

Raymond Wong’s frequent costar, Ruco Chan (陳展鵬), attended the Ani-Con as a guest performer at the Hong Kong Exhibition Center the day before. When Ruco was asked to comment on the recent licentious rumors of Raymond Lam, Ron Ng, and Bosco Wong, he said he has not been reading the headlines, but he was not surprised about the rumors.

Ruco said, “If we’re not familiar with the other person, we should communicate with them more and have good relations with them so it will not affect our acting. Therefore, I don’t think [these rumors] are too surprising.”

Asked if TVB had warned him about avoiding similar rumors in the future, Ruco explained, “Maybe it’s because it hasn’t happened to me yet, so the company and I never had these discussions. Back then, I wouldn’t care, but now I would try to avoid them. Even if I were to eat with my female colleagues, I would bring some extra friends along, so when the paparazzi snap pictures of us, it would be all of us instead of just me!”