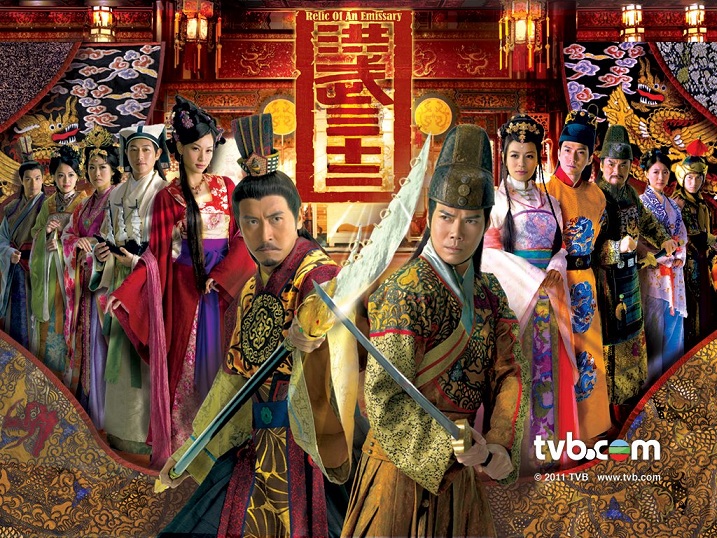 Relic of an Emissary  <洪武三十二>

Sammul Chan as Sam Bo (aka Zheng He; Prince Yin’s bodyguard and advisor) Synopsis (May contain spoilers. Read at your own risk!!):

The story began with the introduction of an imperial guard named Ngo Siu Fung (Michael Tse).  He was an ambitious, cocky, and focused individual until one day he was out on a mission in a ship, which exploded and left him suffering from amnesia.  Trying to repent his past wrong doings, he went through a personality change and wanted to find out who he really was.  This discovery led to a huge dynamic in the game playing process in the kingdom, his entire existence and most importantly, who should he be loyal to?

Drama in a Whirlwind: If I have to describe this drama in a whirlwind, you take a shot of MacBeth’s storyline, a Casa Nova character, ideas of usurping the throne, attempt at a big testosterone production and women trying to get their way being seductive or annoying with a high squeaky voice.

The sound track of the movie is a little weird when I keep hearing the X-File motif whenever the characters are trying to figure out something.  It’s weird because it questioned me to ask such a science fiction based sound is used in a Chinese epic drama. Really?

The costume and make up is not bad.  I loved Kate Tsui’s costumes and make up transformation as she plays two different characters.  A sexy one verses an innocent character. I really believe great acting is not complete without its aesthetics.  Girls know this. Girls feel different when they slap on some 5 inch stilettos.  I love the dark red/blue color theme on her and the hair style.

The plot/ story line is……really boring, pretentious, and awkward to me. I have to be honest here, I only watched like 80% of this.  I tried; I would put this on play and go cook dinner.  But since no one wrote a review on it, I thought I’d take this opportunity to just write about how I feel.

TVB trying to be sexy…failed.  I’ve been watching TVB dramas for 20 years.  I know they’ve been trying to go the sexy route and I just find it soooo awkward.  It’s not sexy at all.  It’s not believable.  Now there’s only a few that can maybe pull it off and that is Joe Ma in this drama.  Michael Tse, on the other hand is not whom I would cast for this character.  The role is depicted as a Chinese Casa Nova. All the girls fall in love with him and he tries to be slick. The only girl who I thought he’d end up with which is Chin Sam Leung’s twin, Chor Chor, whom never even had a chance.  I don’t know why, but this bothered me.  They didn’t even have more than 5 minutes with each other in this 30 episode drama.  But anyway, I always find it a turn off when TVB tries to make a sexy scene in their drama.  It just doesn’t match.

Also, I do NOT appreciate watching Prince Yin (Joe Ma) enjoy getting whipped while I sit next to my parents.

Funniest Scene. I thought it was too much when Princess Wing Yeung escaped from the palace and Ngo Siu Fung went to protect her and both of them got stuck in a cave over night.  Ngo Siu Fung suffered from a wound and needed stitches.  Conveniently, Princess Wing Yeung has a needle and thread.  A princess would carry that? A spoiled and naïve one at that?  Then the next day after fighting off some palace guards they’re in the middle of nowhere trying to get back to the kingdom and Siu Fung who is already wounded, rolled down the hill.  I don’t know about you, but I was laughing so hard at this entire sequence of events.  And in a matter of minutes, the stupid Princess who never did any hard labor or had any practical thinking, built a really nice, functional and sturdy stretcher out of twigs in a matter of minutes! Ok, fine it was an hour or two in the story. But still! And then they fall in love with each other overnight it seems.

Not the best acting in a drama as a cast.  Other than Ngo Siu Fung and Prince Yin, Chin Sam, the other 9012783 characters don’t really stand out.  Their acting didn’t really get to shine but I just think the acting is mediocre overall in this drama.  Nothing stands out to me.  But I did enjoy the over production. Yina: It was a crazy week for me, so I didn’t plan on writing a review until no one else did.  It’s been a week since the ending; would people still care to comment on the drama?

Note: This “Relic of an Emissary” review was written by Yina for JayneStars.com. Please visit Yina’s blog at http://yinareviews.blogspot.com.