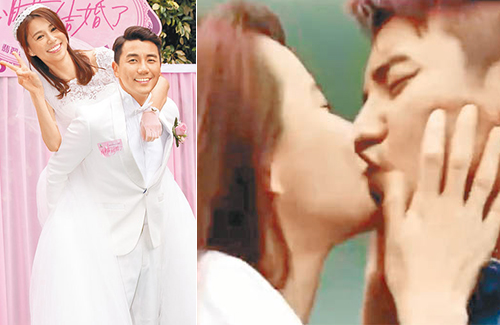 The cast of TVB’s upcoming romantic drama Married but Available <我瞞結婚了> attended an outdoor event on Saturday to promote the series, which will be premiering on Monday, March 13. The drama stars Tony Hung (洪永城) and Priscilla Wong (黃翠如) as a longtime couple who are involved in a complicated four-way love rectangle with Kelly Fu (傅嘉莉) and Raymond Wong (黃浩然), adding more complications to their marriage.

Priscilla and Kelly showed up at the event wearing wedding gowns. Tony, wearing a white tux, walked them down the aisle like their groom. In the series, Tony is married to Priscilla, but for the sake of Priscilla’s career, they have to lie about their marriage. Tony ends up being involved with Kelly, while Priscilla falls in love with Raymond.

Longtime friends, Tony and Priscilla found it difficult to take their married relationship seriously. Priscilla also added, “There’s a scene where I had to slap his face, but I didn’t want to do it too hard because I know he’ll complain about it!” Tony, who was slapped in the face three times by Priscilla, said with a laugh, “And I did complain about it online!”

In a separate interview with Edwin, who is busy with the filming of TVB’s Deep in the Realm of Conscience <宮心計2深宮計>, he was asked if he would be watching Tony and Priscilla’s kissing scenes in Married but Available. Edwin said, “Of course I will! I want to see how intense they get! I also look forward to working with Natalie Tong and doing the same thing with her!” (Don’t you just want to beat him up?) “I don’t need to. Priscilla’s already doing that on the show!”

Edwin then turned serious and said that he hopes Tony and Priscilla’s chemistry could carry the atmosphere throughout the series.