Review: Curse of the Royal Harem (By Hayes) 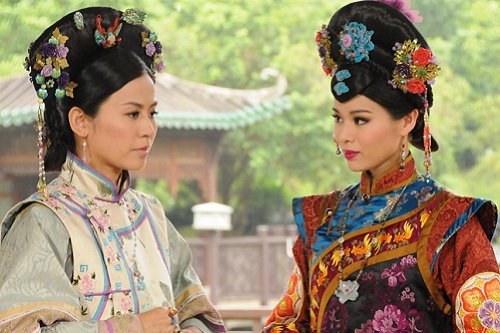 Synopsis: Curse of the Royal Harem is set in the Qing Dynasty under the rule of the Do Kwong Emperor (Sunny Chan). Yee Lan (Jessica Hsuan), the Consort of Emperor Do Kwong’s elder brother, who was missing in battle, is grieving over the loss of her husband. The Empress Dowager (Gigi Wong) instructs that Yee Lan be buried alive in the Emperor’s tomb. However, the current Do Kwong Emperor saves her because he had feelings for her from a long time ago. The Emperor makes her one of his Consorts and the Empress (Myolie Wu), becomes jealous and plots Yee Lan’s demise. Along the way, Yee Lan uncovers a treacherous plot that could potentially endanger the Emperor! Will she be able to stop it in time?

First Impression: YES! I love these types of dramas! The theme song is really good too! I was extremely excited for this drama because ancient ones like these interest me a lot. To be honest, I didn’t even see one trailer for this drama and just decided I was going to watch it, regardless of the cast and plot. It was a disappointment in the first 10 episodes, but it picked up afterwards. The overall drama was slightly draggy though. Let’s go over the main points:

Plot: Running Out of Ideas?

I watched another Qing Dynasty drama, The Life and Times of A Sentinel, in the summer and I couldn’t help but think that Curse of the Royal Harem was copying off some ideas from the first drama. First of all, in Curse of the Royal Harem, Joel Chan, the Prince Sui, is revealed to have a past secret relationship with Myolie, the Empress. Similarly, in The Life and Times of a Sentinel, Kenneth Ma (who was also the Emperor’s brother) had a secret relationship with Elaine Yiu (the Imperial Noble Consort.) And the thing is, both females of the story want to forget the past and continue being the present Emperor’s wives whereas the men can never forget about his true love.

Another thing is, why is the Grand Empress Dowager/ Empress Dowager always the main villain? I’m tired of seeing an elderly woman plotting everyone’s demise. I know it’s true that they are treacherous and “evil” but maybe someone else? Maybe an eunuch or a palace maid?

Enough of that though. So let’s skip over the first half of the drama now since nothing much happens anyway. As we get near episode 20, things pick up and there are dramatic changes to the characters. The action is significantly increases in pace and the drama is preparing itself for the climax (after pregnancies, giving birth, death, sacrifice, unveiled plots, secret relationships, etc.).

After the climax, you would think that the drama would end there. But no, it keeps going. Then you realize that the climax you thought WAS the climax was in fact NOT the climax. And then you wonder, “Is there really a true climax in this drama?” There were a lot of unnecessary scenes.

Characters and Acting: The acting was mediocre. I was watching this drama with my mom and I agreed with her about some things:

a) Myolie’s acting was not very outstanding (at least in the beginning). She doesn’t fit the role of an Empress. But it looks like she tried really hard to deliver this performance.

b) Jessica didn’t really deliver a mind-blowing act. But rather it was the same, plain and nothing really new. The last few episodes allowed us to see an evil, wicked side to her and that was what stood out for her.

c) Sunny Chan was a terrible Emperor. His acting convinced us.

e) Gigi Wong did have the looks of a convincing Empress Dowager.

f) Nancy Wu is always a villain. A well-portrayed villain though. Why can’t she get some protagonist roles and how in the world does her character in this drama survive so long?

Basically those six points sum up the main cast and their acting.

Everything Else: Compared to some other dramas where the plot is rushed, this drama, although draggy, gave a more “artistic” feel. It felt like a slow roller coaster, with ups and downs and some really dull moments.

Another point is that I thought that Jessica had way too much make-up on. Also, the music was repeated WAY too often and some parts of the drama gave me a “deja-vu” feeling, like I’ve watched it in another drama before. OH, I have another example of that. I remember in the Beyond the Realm of Conscience,” when Tavia got slapped in the face by another Consort and her response was that she would one day “return that slap.” And just so happens, in Curse of the Royal Harem, when Myolie slaps Jessica in the face, she said, “One day, I will return that slap.”

Overall: I hope I’m not biased but I enjoyed the drama 🙂 Although acting and plot wasn’t the best, I liked how the characters developed: how someone so bad could suddenly become so good and vice-versa. I thought the costumes weren’t bad either. This review was written by Hayes, a Contributing Writer at JayneStars.com.

54 comments to Review: Curse of the Royal Harem (By Hayes)