Review: Triumph in the Skies (By VCN) 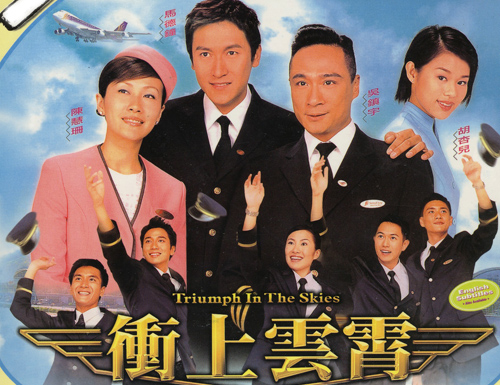 The original Triumph in the Skies was produced nearly 10 years ago but still remembered by viewers as one of TVB’s best written and best performed dramas. But, why review it so long after its initial debut in 2003? In light of the upcoming sequel that hasn’t even been scripted yet, I would like to offer the producers of TVB a gentle reminder to not repeat old errors.

Triumph in the Skies follows the calmly stoical airplane pilot, Sam Tong (Francis Ng) and the stereotypically dissolute pilot, Vincent Ling (Joe Ma), with a girlfriend at every port. During the series, these two experienced pilots vie for promotion as the first Chinese captain at Solar Airlines and the love of their lives, the sentimental Isabelle “Belle” Lok (Flora Chan), a flight attendant. Following her dreams, the frail and capricious Zoe So (Myolie Wu) meddles in everyone’s personal matters until love strikes her. Other characters include the arrogant Isaac Tong (Ron Ng), the irresponsible Donald Man (Sammul Chan), and the outspoken and independent Zita Tung (Michelle Ye), who strive to become successful airplane pilots. Minor characters abound in this 40 episode series as TVB creates a drama about life and work at Hong Kong’s International Airport.

In a drama titled as Triumph in the Skies, it would only be appropriate to expect happy endings over remorse and regret for each of its characters. However, I count only 3 triumphs in the series and also 2 tragedies by the end. In light of the drama’s content, Triumph in the Skies is definitely not one of TVB’s worst titles, but it also doesn’t evoke the romantic sensitivities present in the drama. Even a simple line like “Love Is in the Air” conveys a better sense of romance in an aviation setting than Triumph in the Skies.

Despite being critically acclaimed by viewers, TVB scriptwriters for Triumph in the Skiesseem committed to old errors and character inconsistencies. With 40 episodes or 30 hours of screen time, the scriptwriters were allotted a much more substantial amount of time to develop the plot and characters. However, scriptwriters continue to fall short of delivering an ideal drama. Family reunions, marriages, hook-ups/break-ups and deaths all occur to stimulate this plot-driven storyline. Because I do not want to start a tirade on content structure and proper character development, I will only comment on a single discrepancy on thematic content. To flesh out Belle’s character, the scriptwriters invested a lot of time into the “triangel” lore and Belle’s obsession with fairy tales, thus alluding to Belle’s hopelessly romantic desire for a fairy tale life. But, nothing about her life or marriage is fairy tale-like: jealous bickering, misunderstanding, suspected adultery and wrongful romance constitute her troubled marriage. Then, a heroic death, a random death, and a death, that should have occurred but didn’t happen, unexpectedly sweep through the story like a whirlwind, grossly nullifying all foreshadowing from the aforementioned fairy tale allusion. Why did the scriptwriters introduce and emphasize the fairy tale theme to such great detail if there was no intention to follow through with it?

There is a limited amount of originality in the series. Like many of TVB’s previous dramas, the leading characters consist of the overly used good guy and playboy duo. Can the scriptwriters not invent a different combination? Even the romantic triangle between Donald, Zita and Isaac is just basically a replica of the Sam, Belle and Vincent relationship, whereby one male character altruistically sacrifices his interest in the girl for the sake of friendship. Although the outcomes to these relationships differ in the finale, the structure is essentially the same. TVB’s creativity department definitely needs a knock on the head for delivering recycled material to its viewers.

The on-off relationship between Philip Tong (Shek Sau) and Cammy Ying (Mary Hon) seems very fake. Their behaviors don’t suit them as mature adults. What sound-minded adult would behave as they do? Similarly, the romance between Paul Mok (Jerry Lamb) and Ruby Bui (Louisa So) is so utterly unbelievable and typical of TVB. How does Ruby, being a perfectionist, fall in love with a clumsy and unambitious significant other? Do opposites truly attract or is it folly in the hands of TVB scriptwriters again? As comic relief, these characters were somewhat funny but outrageously unrealistic.

Despite my criticisms, I do appreciate some of the finer nuances that the scriptwriters incorporated into the series. Among my favorites is a reference to Snow White and the Seven Dwarves when describing Zoe’s character and her seven brothers. This is a refreshing hint of sophistication that TVB has never demonstrated before in the past. There was also some very nice footage of Rome, Hokkaido and Adelaide that inspires traveling.

No single actor or actress performed consistently better than his/her co-stars. The performances were not mediocre but simply adequate. To maintain a reasonable review length, I will only evaluate the primary roles. In Triumph in the Skies, Francis Ng portrayed Sam Tong, a reserved airplane pilot, who takes his profession very seriously. Francis did well, performing the quietly shy gentleman and strict instructor to trainee pilots. His more emotional scenes with Zoe were executed with the appropriate amount of tenderness, but I found his depiction of a well educated professional lacking. Though knowledgeable in aviation terms, his enunciation of them in English was not equal to his purported education and rank as the captain of an airline, making his character much less credible. Lastly, I found his verbal affirmations in the form of an oddly sounding “uh-huh” extremely annoying. If this was the producer’s idea, then I owe Mr. Ng an apology for this undeserved bit of criticism.

As Belle Lok, Flora Chan was marginally acceptable. I expected a more youthful and more classically beautiful face to portray the romantic character of Belle. I don’t usually allow physical appearances to affect my assessment of acting skills, but it seems highly unrealistic that someone Flora Chan’s age would still entertain such foolish thoughts as fairy tale dreams. When casting a character such as Belle, one should naturally consider the roles of Audrey Hepburn in Breakfast at Tiffany’s or Vivian Leigh in Gone With the Wind. Lacking the graceful innocence of youth, Flora Chan was not very convincing as the free spirited Belle.

Joe Ma played Vincent Ling, the best friend of Sam Tong. In the series, Vincent is a known philanderer, but the audience sees very little of his indulgent lifestyle. During most of the series, viewers are only exposed to his arduous courtship of Belle and his futile attempts to reconcile his marriage. His promiscuous past is only revealed to the audience as hearsay from other characters. In drama, it is always better to show the audience than tell them. So, Joe Ma’s performance can only be described as sufficiently adequate because there was nothing extraordinary about his role; the more dynamic part of his character was unfortunately undisclosed to viewers. Relatively new to the screen in 2003, Myolie Wu, Ron Ng, Sammul Chan and Michelle Ye portrayed their roles satisfactorily. Neither of their performances came through as exceptionally interesting or remarkable, but they managed to deliver their lines and emotions with enough effect to help the story unfold.

Conclusion and Hopes for the Sequel

The storyline in Triumph in the Skies is not a completely original one. Character and plot inconsistencies continue to plague TVB dramas and there are no breakthrough performances either. With reasons unbeknownst to me, the series succeeded in ratings anyway. Perhaps, it was the scenic footage of faraway places that attracted the audience. Or, the unfamiliar topic of aviation that piqued interest. Based on this critique, Triumph in the Skies only deserves 3.5 out of 5 stars.

To construct a successful sequel, TVB must take risks and not hide behind the safe harbor of formulaic plot-driven stories and instead embrace character-driven story arcs. Familiar characters should now be allowed to make sentient decisions instead of being carried on a wave of individual events that moves the plot along. By having Bosco Wong and Kenneth Ma reprise their roles in the sequel, TVB scriptwriters are moving in the right direction to developing a more realistic and consistent sequel. Let’s keep our fingers crossed that a better sequel is in the making.

36 comments to Review: Triumph in the Skies (By VCN)