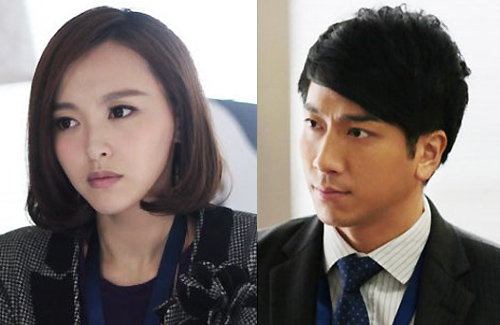 Did Ron Ng (吳卓羲) play a role in breaking up popular celebrity couple, Tiffany Tang (唐嫣) and Roy Chiu (邱澤)? Ron freed himself from blame, “I am definitely not the third party! Maybe she has a new love prospect!”

When Roy stepped forward and confirmed that his relationship with Tiffany was over this week, controversy ensued as to when the pair had officially broken up. Roy said it was 7 months ago, but Tiffany’s assistant hinted that the pair were still seeing each other in October.  Since Roy did not reveal the reason for the breakup, it was speculated that he fell for Taiwanese model/actress, Tia Li (李毓芬). Now rumors are rife that Ron may have stolen Tiffany’s heart instead.

While filming mainland Chinese drama, The Lady in the Cubicle <格子間女人> photos emerged in January in which Ron and Tiffany were behaving intimately. Even Ron’s family questioned whether he was involved with Tiffany, but Ron knew that she already had a boyfriend and kept his distance. Ron did not even have Tiffany’s phone number until recently, and they exchanged several text messages only as colleagues.

Ron praised Tiffany for her beauty and her good personality, but they did not socialize in after-work activities. After filming The Lady in the Cubicle each night, Tiffany would go home to rest while Ron returned to the hotel with the rest of the cast and crew. Ron said he did not know that Tiffany and Roy had broken up until the press asked him for comment.

“I am definitely not the third party! When we were filming together, I already knew that she has a boyfriend. We did not discuss too many personal matters and only shared jokes,” Ron said. “We do not have such feelings for each other. We only chat as regular friends. If it were to happen, it would have happened earlier.”

Did Ron offer Tiffany any consolation after her breakup? “There is no need to. Maybe she has a new love prospect?”

Since Ron’s image was streaked by scandalous rumors last year, he has dedicated himself to focus only on work now. Stating that he is still single, Ron said, “I don’t even have time to spend with my family. Where do I find the time to look for a girlfriend?”