Rose Chan Complains Bosco Wong is Too Busy to Travel Together 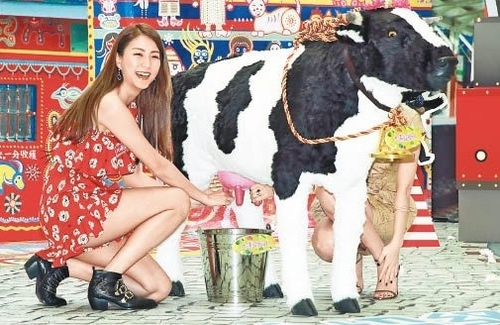 Last month, Rose Chan (陳嘉桓) and her rumored boyfriend Bosco Wong (黃宗澤) were seen in Malaysia at the same time, leading to speculations that they were traveling together. However, both parties denied it. When Rose attended an event promoting Taiwan yesterday, she expressed she should travel to Taiwan to meet boys, and complained Bosco had no time to meet up with her in Malaysia.

“Last time, many people were coincidentally in Malaysia at the same time,” Rose said. “There was Pakho Chau (周柏豪) and Rainky Wai (蔚雨芯). We all kept in contact to share food recommendations, and we even met up to see each other. Bosco introduced me to some restaurants and helped me book a table but he was too busy with meetings to join me, so I just explored Malaysia by myself.”

When asked if they would travel to Taiwan together next time, she expressed she wants to visit Taiwan by herself to meet a boyfriend. In fact, she has thought about marrying a local. “I know a lot of Taiwanese friends, but never tried developing a real relationship with [Taiwanese boys],” Rose revealed.

She stressed that Bosco won’t be mad as she does not have a romantic relationship with him. Hearing this, a reporter immediately asked, “Weren’t you dating him for a long time?”

Rose said, “There is such thing? If someone is going to be mad, it’ll be my younger brother. He’ll be mad that I’m not bringing him along to play.”

The actress added she might be open to speed dating in a few years, but for now “it seems scary and too deliberate.”