In a steady relationship with Kenneth Ma (馬國明) for one year, Roxanne Tong (湯洛雯) is often asked when they plan to get married. The 34-year-old actress debunks rumors that the couple is planning a secret wedding this August. Although many of her close friends are already happily married, Roxanne states that she does not necessarily need to get married or have children in a relationship.

In an earlier episode of talk show Master’s Talk <師父有請>, Roxanne appeared with close friends Tracy Chu (朱千雪), Jennifer Shum (岑杏賢), and Angel Chiang (蔣家旻). The topic of the episode was “marrying well,” and the friends chatted about their significant partners.

In the eyes of  many people, Tracy and Jennifer have married well.  Tracy’s husband works as a doctor and Jennifer’s husband works in the financial industry. Jennifer admitted that she is “very shallow” and was initially not attracted to her husband at all, “His physical appearance was just not my type of tea.” After getting to know him better, Jennifer admitted, “He had a lot of great qualities than I had imagined.”

When Tracy was asked if she found her husband handsome, she paused for three seconds before answering which caused everyone to burst out laughing. She exclaimed that everything is fine as long as she finds him handsome. “I’ve known my husband since I was young, so I feel very safe. I also don’t have to waste a lot of time in getting to know him, and I feel very comfortable talking to him. We have been in a long distance relationship for many years, and have a lot of trust for each another,” Tracy revealed.

During her eight years in the entertainment industry, Tracy disclosed that she was never romantically pursued. Roxanne teased that she knew the reason why–if someone asked for Tracy’s telephone number, she would just tell them to send her an email. Tracy did not feel the need to exchange telephone numbers with a male co-star, because if he needed anything, he could just speak with the production assistant. As she does not like meeting many different people, Tracy prefers to just stay with a group of friends who makes her feel comfortable.

Tracy is very rational and would never mix up real life and emotions in dramas. She would even avoid unnecessary sexy and kissing scenes after dating her boyfriend. “There was a scene where I was supposed to fall from the rooftop. The male lead had to hold onto me, and in the process would rip my shirt and expose my shoulder in a sexy manner. It’s not that I don’t want to be sexy, but I’m not skinny so there’s no point! I’m afraid that netizens would screen cap and say that my arms are fat.” She ended up sewing her tank top to the outer shirt, so that only a little bit of shoulder would be exposed.

Registered as a barrister specializing in civil and criminal litigation, Tracy is currently working at a law firm, but she still wants to work as an entertainer and achieve a balance between her personal life and career. She added that she is very afraid of giving birth because she is afraid of gaining weight. 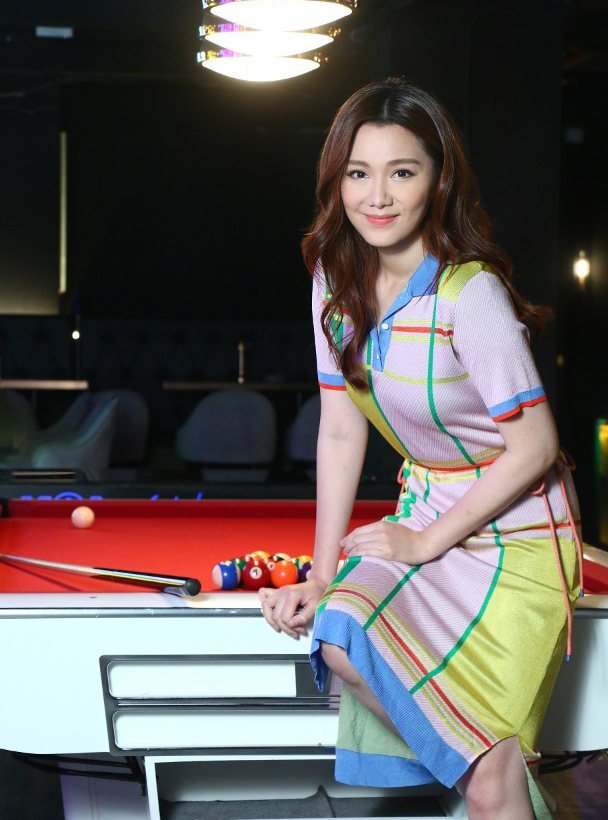 Seeing her close friends achieve personal milestones such as getting married and having children did not change Roxanne’s mind. “Each person’s path is different; the most important thing is that it’s suitable for yourself and makes you happy. If I feel it’s the right time, then I’ll do it. I’m not the type of person to plan everything, as there’s a lot of pressure.”

Roxanne’s parents are opposites and a perfect match. The actress likes to date men who are like her father, because he is very obedient and loves his family.  On how she gets along with boyfriend Kenneth Ma, Roxanne said, “I like to talk, and Kenneth Ma is a man of few words. His usual phrases are, ‘Whatever you like’, ‘That’s pretty good’, ‘I’m indifferent’, and ‘I’m so annoyed.’”

Roxanne: “I’m Not a Traditional Woman”

Ever since making their relationship public last May, the pair has been bombarded with questions about their marriage plans. Although she does not feel a lot of pressure, she is tired of all the questions.

An easygoing person, Roxanne believes in the natural dynamics of a relationship and is flexible about marriage. Admitting that she and Kenneth have discussed the issue, she said, “We have a mutual understanding of a normal couple, but we didn’t discuss it exactly because we really don’t have the intention to get married yet. I want to focus on work first, so the rumors about our wedding in August are impossible.”

Asked if she would have a flash marriage without warning, Roxanne replied, “It’s possible, but maybe I might not get married either. I’m not a traditional woman, and I don’t need to necessarily get married. When I was younger, I thought about having children, but now I don’t want to plan everything as they may not happen that way anyway. So it’s better to just go with the flow.”

As to whether Kenneth feels a rush to get married, Roxanne said, “No, he’s very chill, even more than me.” Roxanne added that her parents are also very understanding, and has not given her any pressure to get married or that she must have children.