Taiwanese actors Roy Chiu (邱澤) and Janine Chang (張鈞甯) filmed Eight Year Old Dad <八歲的爸爸>, in which they played a couple, in Qingdao a while back. Recently, news broke that the same-age costars are dating after they were caught leaving Roy’s house together in the same car. The 37-year-old addressed the rumors through his manager, “I’m actively pursuing her, please give me your blessings.”

Last Wednesday, Taiwan’s Mirror Media photographed Roy leaving his house with Janine. She sat in the passenger seat of his car, and frequently smiled. They appeared very happy inside the car until they realized the paparazzi were on their tails. Roy then stepped on the gas to get rid of the reporters.

The two were also exposed to have traveled to Japan together. In response, Roy generously admitted that he is working hard to pursue her. In the past, he never publicly acknowledged his relationships with Rainie Yang (楊丞琳), Joe Chen (陳喬恩), Tiffany Tang (唐嫣), and Tia Lee (李毓芬), so it is a big move for him to reveal his current relationship status. However, Janine, who is in Paris, seems unaffected by the recent events. 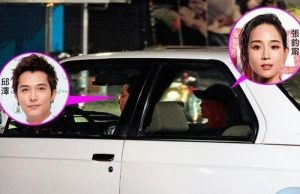