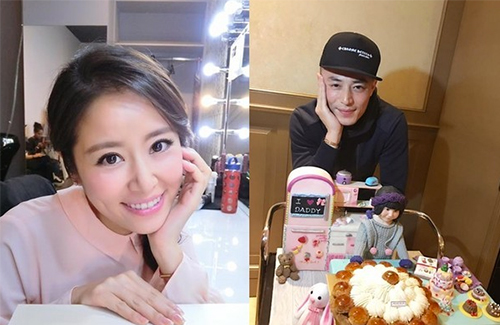 Great news all around for the Lin-Huo family! According to Taiwanese media reports, actress Ruby Lin (林心如), who gave birth to her and Wallace Huo’s (霍建華) “little angel” on January 6, is recovering well from childbirth. The source says Ruby was already out of bed and walking about on the second day after birth, and is producing breastmilk.

Ruby cried when she heard her daughter’s first cry. She could not see if Wallace, who was by her side at the time, was crying, but she did hear him say, “She’s beautiful!” Ruby held her daughter closely, and didn’t want to let go of her.

For privacy, the 40-year-old actress declined to show photos of her baby. However, she did say, “She has a dimple on each cheek! Wallace and I each share one side of her. She is a combination of us both. It’s adorable!”

The source added that Ruby plans to find a nanny to help her during her first month of postpartum recovery. Ruby plans to return to acting afterwards. It is also said that the couple are interested in having a baby number two.