Ruco Chan and Liza Wang to be TV King and Queen at Singapore’s 2015 StarHub Awards? 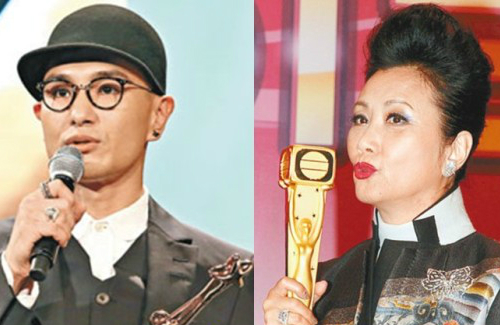 The 2015 StarHub TVB Awards Ceremony will be held on Saturday, October 24, in Singapore’s Marina Bay Sands. Although the ceremony has not yet taken place, tabloids are speculating that Ruco Chan (陳展鵬) and Liza Wang (汪明荃) will be titled TV King and Queen of the night.

Reportedly, Ruco will be winning the My Favourite TVB Actor award for the second time in Singapore for his performance in Captain of Destiny <張保仔>. On the other hand, Liza will be taking home the My Favourite TVB Actress award for her performance in Limelight Years <華麗轉身>. During an interview with the press regarding such predictions, Ruco admitted that he is happy. “Singapore is a place I really admire, and getting the top award twice in a row means that viewers enjoy my acting. Of course I’m happy! I want to thank the producer and Mrs. Catherine Tsang (曾勵珍).”

Earlier, tabloids claimed that Ruco is demoted by TVB with no awards to win and no dramas to film. Ruco expressed, “The award predictions prove that the demotion rumors are false! I always have confidence in myself when it comes to the annual awards ceremonies.”

Tavia Yeung (楊怡), Linda Chung (鍾嘉欣), Nancy Wu (胡定欣), Eliza Sam (岑麗香), Grace Chan (陳凱琳), and Adam Cheng (鄭少秋) arrived together at Hong Kong International Airport this morning for their flight to Singapore. When asked if she has confidence in winning TV Queen, Linda replied, “Awards are not important. It’s more important that viewers enjoyed the dramas. I see a possibility for Liza in Limelight Years.”

Grace admitted that she has no confidence in taking home an award. She expressed, “I think my performance was mediocre. I have confidence in Tracy Chu (朱千雪) and Jacqueline Wong (黃心穎). They’re really good! It’s my first time attending an awards ceremony, and I’m already happy to be able to walk down the red carpet.”

25 comments to Ruco Chan and Liza Wang to be TV King and Queen at Singapore’s 2015 StarHub Awards?