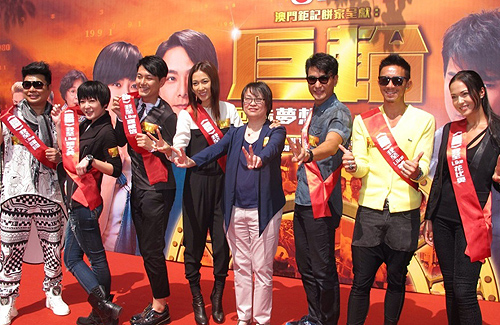 Cast members of Brother’s Keeper <巨輪> were coincidentally involved in recent car accidents. Several nights ago, Louis Yuen (阮兆祥) crashed into a vehicle while driving his Mercedes Benz. Yesterday, Ruco Chan (陳展鵬) collided with a taxi on his way to Macau to attend the drama’s promotional event. Fortunately, no one was injured and both artists announced their safety to reassure the public.

On October 11 at around 8 p.m., Louis’ Benz crashed into another car after he returned from a trip to Vietnam. His sports car tumbled around, but did not flip over. Feeling apologetic, Louis offered the other driver a free ticket to his upcoming concert. Luckily, the driver was a friendly person, and the two even took a photo together as a memory of the incident.

Although Louis still has to spend a great deal of money to mend his car, he feels grateful that he is fine and healthy. He laughed and exclaimed, “When I escaped from the tumbling car, I was thinking to myself how I definitely cannot injure my face, and so I covered it with my hands.” Friends including Wong Cho Lam (王祖藍) sent their blessings via Weibo.

On the other hand, Ruco also ran into a mishap yesterday while driving himself and Linda Chung (鍾嘉欣) to the ferry docks on their way to Macau. His $1.3 million HKD Jaguar F-TYPE sports car lightly collided into a taxi near the Sheung Wan MTR station. Worried that both main leads of the drama will be late for the promotional event, Ruco decided it was better for Linda to leave first. No one was injured, and Ruco’s car suffered minor issues. However, traffic around the area was blocked for ten minutes. After things were resolved, Ruco boarded a sponsored helicopter to Macau and arrived to the event on time.

Similar to Louis’ situation, the taxi driver did not want to make the accident a big deal, and they decided to take care of the expenses themselves. Ruco revealed he will be in contact again with the driver shortly. “My car is fine, but the taxi has it worse. Compared to Louis, our accident was very minor!”