Ruco Chan Shaves His Head for “Heaven’s Will” 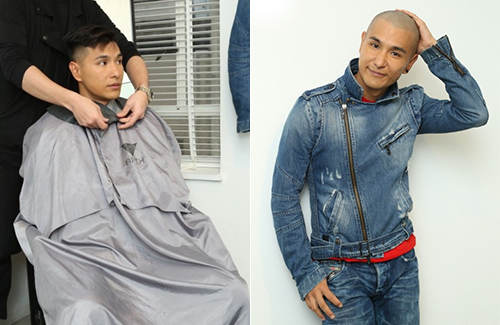 As filming for The Unholy Alliance <同盟> wraps up, Ruco Chan (陳展鵬) will be traveling 200 years back in time to get into work for Heaven’s Will <天命>.

Heaven’s Will, produced by Chong Wai-kin (莊偉健), is a historical drama that follows the final years of the Qing Dynasty official Heshen, infamously known as one of the most corrupt officials in Chinese history. Ruco will be playing Heshen, while Shaun Tam (譚俊彥)—son of Ti Lung (狄龍)—will be co-starring as the Jiaqing Emperor. Selena Li (李施嬅), Natalie Tong (唐詩詠), Elaine Yiu (姚子羚), Joel Chan (陳山聰), and KK Cheung (張國強) also star.

Ruco, who will start filming for the show this week, went to a hair salon to get his hair shaved off for the Qing Dynasty role. Having already shot several Qing Dynasty dramas in the past—most recent one being last year’s Captain of Destiny <張保仔>—Ruco is not a newcomer in the experience, but his clueless knowledge about scalp care has gotten him into trouble more than once.

“The last time I shaved my head, the weather was really hot. Perhaps that’s why my skin started peeling off the second day,” shared Ruco. “And then it started scabbing. It was swollen and inflamed!” Ruco added that it took several months for his scalp to heal.

He will not repeat the same mistake again. The award-winning actor is forking out $1,000 HKD to buy scalp care products for his head this time, saying, “Hair is very important for a man. The last time I shaved, both thick hair and thin hair grew back. I really need to take good care of my hair this time!”

Heaven’s Will is Ruco and Shaun’s first project together. “We met many years ago in Mainland China,” said Ruco. “I look forward to creating new sparks with him.”