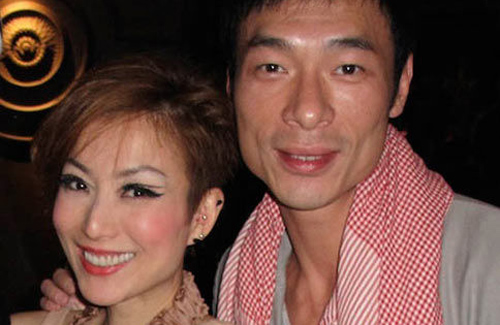 In November 2013, the longtime couple Andy Hui (許志安) and Sammi Cheng (鄭秀文) married in  a chapel situated on top of a private beach hotel in Bali, Indonesia, inviting only a few of their immediate family members. In May of this year, the couple plans to hold a six-table wedding banquet in Hong Kong to celebrate with their relatives.

Reportedly, Andy initially purchased a Hermès ring worth over $100,000 HKD for Sammi’s wedding ring, but Sammi was not satisfied with it, explaining that the style was too old-fashioned and invaluable. He then picked out a $500,000 HKD diamond ring from Van Cleef & Arpels, but Sammi said the ring had “too many diamonds.” Andy then settled with a much cheaper $70,000 HKD Boucheron Quatre ring, which Sammi immediately accepted, calling it “trendy”.

Laughing at Andy’s desperateness, close friends of the pair joked that Andy is a dealer of imported stocks. Andy said he has already waited for Sammi for over twenty years and does not mind spending more money for her. One of Hong Kong’s richest celebrities, Sammi herself has a self-worth of over $100 million HKD, but Andy said, “After marriage, I will not spend a single penny from her.”

Reportedly, Andy and Sammi had a few disagreements in regards to their wedding plans – while Sammi wanted to keep the dinner banquet simple, even opting to not wear a wedding dress, Andy’s family hoped for a larger wedding so they could invite all of their relatives and extended family members. “Andy’s eight older brothers are all married and they hope to hold a few dozen tables for their relatives, but Sammi doesn’t want that,” an insider revealed. “Andy said his wife makes the final decision, so they finally settled on holding a six-table banquet.”

For their honeymoon, Andy and Sammi decided on a world cruise from Europe, with stops in Egypt, the Caribbean, and Japan. The couple will be taking their vacation from May to July.