Sammi: No Concert During Chinese New Year Because… 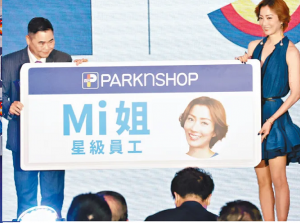 Revealing that she got a cushy remuneration for the job, she shared the 50th birthday of PARKnSHOP was especially significant as she is also 50 this year. Asked if she has formally applied for the premises for her concert, Sammi kept mum, but revealed that she has already received numerous requests from friends for concert tickets in advance!

As for the date of the concert, Sammi said that she has no particular date in mind, but that it “mustn’t be during lunar new year” as she wants to enjoy her radish cake, a festive new year delicacy. “I know the Hong Kong Coliseum will be very busy, it has its rules and (we’ll) respect that,” As for the recent real-name guideline for ticket-buying, Sammi says she is not knowledgeable about the system, and will do her part to focus on doing the concert well, and leave the negotiations to her record label if she cannot manage on her own.

About stepping into her fifties, Sammi laughingly said that she once imagined her face sagging at this age, but she has since learned that it is possible to live well at every stage of life by paying attention to all facets of health, and to embrace aging with a positive mind, most importantly to live happily and freely.

Reveals Hubby Andy Hui’s Comeback Plans
Asked if her husband, singer Andy Hui (許志安) has plans for a formal comeback this year, Sammi revealed that he has signed on to a record company. She replied, “I’ll cheer for him, let nature run its course! Rather he needs to adjust mentally to face the public and himself, this is the best time, I feel that he is already physically and mentally prepared,”

However, Sammi has no plans to hold a concert together with her husband, preferring to go it alone for now. Neither is she keen on following what many celebrity couples have done to star in a reality show with her husband. Despite being “most unafraid of revealing her true self, she feels that her personality is not suited for reality shows. “There are (different) individuals suited for each job,” added Sammi, and she would rather stick with “doing music albums and concerts”.