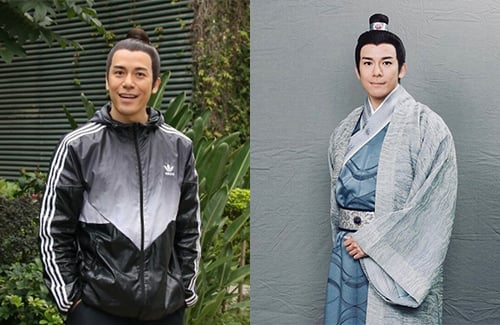 After parting ways with TVB in 2016, Sammy Sum (沈震軒) has signed a new serial-based contract with TVB in 2020, and will be making his comeback appearance in the upcoming period drama Smiling Across the Mortal World <一笑渡凡間>, co-starring Edwin Siu (蕭正楠) and Roxanne Tong (湯洛雯). The drama, which is about the Buddhist monk Ji Gong, has already begun filming in Hong Kong.

Sammy’s last drama before leaving TVB was the romantic comedy Come with Me <性在有情>.

“It took me a while to get used to the filming schedules again,” said Sammy. “On my first week back I had 0430 calls (early morning to night schedules) every single day. But I think the worst part of it all is that after I left TVB, I moved to Yuen Long, so it’s taking me at least an hour to commute to work every day.”

Nonetheless, the pace of filming has slowed down due to the coronavirus outbreak. Sammy only needs to film one unit per day.

Set during the Southern Song dynasty around mid-1100s, the drama is about the early beginnings of the monk Ji Gong. Sammy plays a character who possesses both literary and martial qualities. “He also has a very special background, but I don’t want to spoil the story,” he said. “My character basically fights throughout the show.”

Sammy hinted that he will be filming more TVB dramas in the future. “My next project was originally going to be a Chinese drama, but many studios had to halt filming there. Fortunately, TVB called me back just in time.”

2 comments to Sammy Sum Returns to TVB After 4 Years