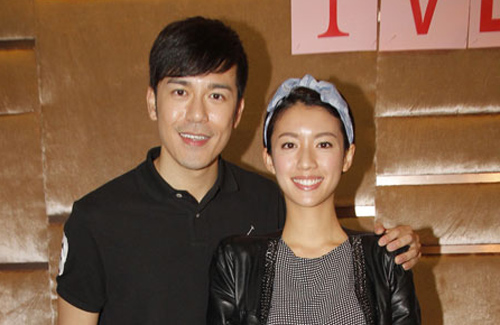 The cast of TVB’s Young Charioteers <衝線> attended a dinner banquet to celebrate the series premiere. Sammy Sum (沈震軒) revealed that his character, nicknamed “Fighting”, shares a sweet relationship with Sisley Choi (蔡思貝), who portrays his childhood friend and love interest. However, Him Law (羅仲謙) also becomes interested in Sisley, turning it into a love triangle story.

Sammy stressed that he will never let love triangles happen in his own love life, adding that he will not introduce his girlfriend to his friends until their relationship becomes very stable. Is Sammy hinting that he is no longer single? Sammy sighed and said, “I’m finding one. I haven’t dated in four years, and I failed the last time I tried to pursue someone.”

Sammy and Sisley incurred dating rumors during the filming of Young Charioteers. The stars denied dating, maintaining that they are only close friends. “He wouldn’t want me anyway,” said Sisley. “He told me he didn’t like washboards! Don’t misunderstand!”

The 31-year-old actor then said that he really wants a girlfriend. “It’s all about the feeling. We have to be able to communicate. Two years ago, I never thought about dating, but now seeing the people who are the same age getting married and having kids, I feel that I should be more open and start searching.”

12 comments to Sammy Sum Wants to Look for Girlfriend