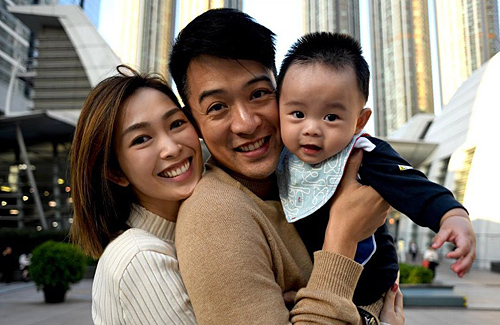 After 12 years of working at TVB, former Miss Chinese International winner Sarah Song (宋熙年) and her husband Jason Chan (陳智燊) left the station. Though the couple has been working at TVB for many years, they never made it to the A-list. With a son now, the two have focused on their YouTube channel, and they have plans to expand internationally.

Sarah admitted that it was really outside her comfort zone to leave TVB because she had learned so much. Hosting entertainment news program The Scoop <東張西望> for many years, she already considered the company as her second home and colleagues as her family. When she decided to leave, she considered it as a “graduation” and a chance to expand.

As Sarah enters a new stage in her career, she hopes to start a new goal alongside her husband. The couple plans on producing their own show that would also attract viewers overseas. She said, “We have been thinking of this idea for a really long time. We hope to focus on education, fashion, or lifestyle, in which we get to produce and direct the content ourselves. We want our show to be broadcast online or on television. In order to be aired on television, the perspective and content has be very rich, so we really need to prepare.”

Sarah believes this new start is good because there is more freedom and flexibility in scheduling, whereas she had a more restrictive schedule at TVB. She now has more time to focus on her family and watch her son grow. Rather than depending on a nanny, she wants to raise her son herself and be by his side. There have also been hints that she and Jason may want to expand their family and have another baby.