Ten Years Late is a story that revolves around six young working adults possessing different backgrounds and perspectives on living life in a big city. It opens up with Jin Ran (played by Shawn) giving up his high-paying job overseas to return to China and pursue his love Yuan Lai (played by Nazha). He becomes the CEO of a tourism company where he meets Yuan Lai and begins what viewers have called “a sweet and heart-racing pursuit of love”.

The main couple’s compatibility caught the most interest in online discussion forums, as fans praised Nazha’s beautiful looks and Shawn’s unique charisma. A scene that fluttered hearts and triggered great laughter was when Jin Ran mistook that Yuan Lai and Zhao Cheng Zi (played by Jeremy) for holding their wedding and stormed into the wedding hall attempting to stop it. But it turns out that Yuan Lai was only the bridesmaid. Shawn’s startled look and awkward smile had many viewers laughing at his mistake, as they later commented, “This drama is sweet and funny; seeing such a pair of godly visuals dating calls for an investment!”

Viewers also praised the beautiful cinematography. Without exaggerated use of blurring and lighting as characteristic of idol dramas, Ten Years Late hits all the right visuals. 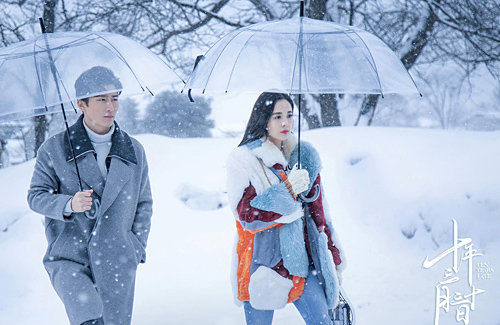