Originally set for premier on October 15 on Tencent after filming wrapped last June, Yang Mi (楊冪) and Xu Kai’s (許凱) anticipated drama She And Her Perfect Husband<愛的二八定律> was delayed due to “technical issues”, to fans’ anguish! 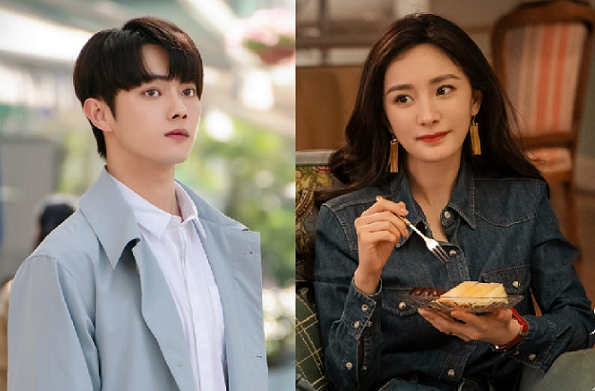 Censorship Concerns?
Playing out the trope of female character with younger man, capable but single lawyer Qin Shi (Yang Mi) and charming homebody Yang Hua (Xu Kai) get hitched for their own reasons, via a marriage-before-love setup, in what looks to be one of the hottest dramas in the second half of this year. The trailer released has already caused quite a stir, due to the daring hugs and kisses shared between the leads, who are 9 years apart in real life.

While some fans are skeptical of the “technical issue” blamed for the delay, others suggested that She And Her Perfect Husband might have stepped on the toes of National Radio and Television Administration due to its “excessively entertaining content”, though unlikely as the drama has already obtained distribution permit from the authorities. Another plausible reason were plans for a simulcast on television, web and satellite, which explained the delay even after the initial broadcast date.

Too Much Hype?
However, netizens speculate the most likely reason for She And Her Perfect Husband’s broadcast delay was that the drama clashed with the upcoming National Congress of the Chinese Community Party; the overwhelming interest and hype generated might be exactly what caused the series to be delayed! Apparently, lead actor Xu Kai had sought a total of 20 celebrity friends including Huang Xiaoming (黃曉明), Qin Lan (秦嵐), Nie Yuan (聶遠), Wu Qinyan (吳謹言), Esther Yu (虞書欣), Li Yitong (李一桐), Tan Jianci (檀健次) and Sandrine Pinna (張榕容) to repost a drama update on Weibo; while lead actress Yang Mi’s styling and accessories in the drama even trended on Weibo, proving the drama’s massive popularity.

As the confirmed date for the drama remains in question, some fans who had specially upgraded their Tencent video membership to catch the production are now screaming fraud and demanding a refund from the platform. With netizens disappointed by the wait since June 2021, the production crew called on everyone to remain patient while Yang Mi’s arch supporters are also calling for calm amid fan discontent.