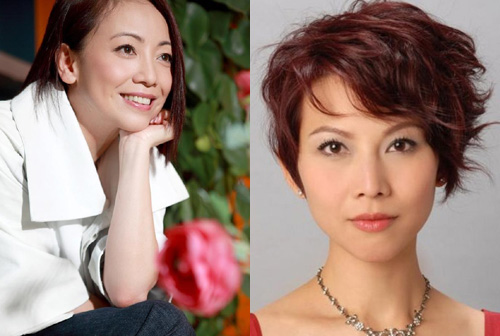 Due to TVB losing its long held monopoly over the free television market in the Hong Kong, many former and current TVB artists and production staff were recruited by rival stations. It was understood that top fadans, Ada Choi (蔡少芬) and Sheren Tang (鄧萃雯), who held guaranteed ratings for their series, were eager to leave TVB as well.  TVB countered by hiring ATV “mature women” Alice Chan (陳煒) and Elaine Ng (吳綺莉), who will be acting in upcoming TVB series.

Over the last two years, Sheren Tang has focused her career in mainland China. This month, she will return to TVB to film War and Beauty 2 <金枝慾孽 2>. Aside from resuming her “Yue Fei” role which rocketed her to great popularity, Sheren’s primary concern was to fulfill all filming obligations with TVB and extricate herself from the company. Sheren was eager to resume her free agent status, which would make filming with other television stations easier.

The original War and Beauty was a phenomenal success. Although TVB hoped that the original cast can film the sequel, Charmaine Sheh (佘詩曼), Maggie Cheung (張可頤) and Bowie Lam (林保怡) had left TVB, while Gigi Lai (黎姿) got married and retired from acting. War and Beauty 2 will only feature Sheren Tang, Moses Chan (陳豪), and Ada Choi.

It was understood that Sheren Tang did not possess strong interest to film War and Beauty 2, due to the absence of the original cast. Producer Jonathan Chik (戚其義) and screentwriter, Zhou Xuming (周旭明) were interested in stretching their creativity and incorporating lesbian aspects in the sequel, which were at odds with Sheren’s Christian beliefs. Since Producer Chik promised Sheren that the plot will not dwell heavily on lesbian themes, Sheren agreed on the offer.

An insider revealed, “Over the last few years, Sheren has focused on filming in China, where the salaries were greater and the production value higher. There was no rest filming for TVB and the company was cheap. There was no fear of it being a loss. Everyone knows that Sheren is very careful in selecting her filming projects. Since filming No Regrets <義海豪情>, she has not accepted any other series.”

The insider continued, “Whether it was Ricky Wong (王維基) of City Telecom (CTI) or another television station, they sought out Sheren a long time ago. There offers were very attractive, full of sincerity and respect. There was nothing left at TVB for Sheren to be unable to let go. Many former producers and scriptwriters have already left the company. After Jonathan Chik and Zhou Xuming complete War and Beauty 2, they will go help Ricky Wong. Sheren will not sign another [TVB] management contract to bind herself. After she resumes her free agent status, she will decide whether to film for another local Hong Kong station or focus on mainland China.”

Since giving birth to her daughter, Zoe, last year, Ada Choi prioritized family foremost. Even when she filmed in mainland, she will bring Zoe with her. Before accepting a new project, Ada will make certain that she will get enough sleep and rest during the filming process. Filming for TVB meant working 18 hours per day, which would prohibit Ada from taking care of Zoe and getting adequate rest. Allegedly, Ada Choi possessed the same inclination as Sheren Tang: to complete filming commitments with TVB and leave the company within the year! Excerpt from Next Magazine #1144

Jayne: I am not surprised by this news. If Sheren were eager to film for TVB, she would have picked a project already. With high-profile producers such as Jonathan Chik rumored to go work at CTI, naturally Mr. Chik will bring his own roster of artists he prefers working with. Will Moses Chan be the next to leave? How many more years left in Moses’ contract?