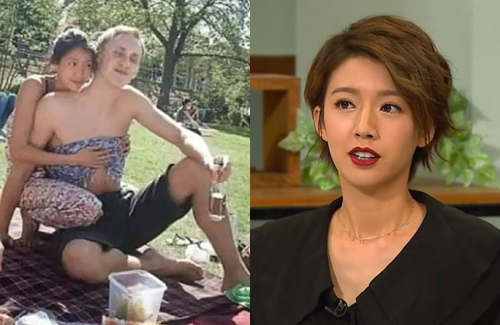 Since her debut in the entertainment industry, Sisley Choi (蔡思貝) has been linked frequently with her male co-stars and given the unflattering label of “human flirting machine.” Sisley’s easy friendliness with people, including male colleagues, may have made others misunderstand her. Studying abroad shaped her adventurous personality, while her relationship with her German ex-boyfriend taught her the challenges of young love.

Guesting in an episode of  TVB talk show Young and Restless <後生仔傾吓偈>, the 29-year-old actress shared her study experiences abroad. After finishing high school in New Zealand, Sisley applied to be an exchange student in Germany and worked as an au pair taking care of three young children. At the time, she was unable to speak a word of German. Aside from taking classes, the fastest way to learn German is meeting new friends.

It seems that Sisley was fated to meet her German ex-boyfriend in a scene straight out of a romantic drama. “I was drinking with friends by the river. When we were leaving, my female friend was tipsy so her bicycle crashed into mine. Flying off the bicycle, my shoulder grazed the cement ground and the skin was torn off and you could see bone. It wasn’t even bleeding then–there was just pus coming out! I didn’t know what to do and then suddenly he appeared! There was a gas station nearby, and he asked the attendant if he could borrow a bar of soap. He helped disinfect and bandage my wound.” Until this day, the scar remains on Sisley’s shoulder.

Even after his heroic rescue, the pair only added each other on Facebook and did not see each other until randomly meeting at a bar nine months later. Becoming friends, they naturally progressed into a dating relationship. Her German boyfriend was a ski instructor, and one of their most romantic memories together was going to Switzerland for a Christmas ski trip.

Though she enjoyed Germany, Sisley had dreams of joining Miss Hong Kong 2013. The idealistic lovers did not consider that this would eventually end their relationship. “I told him that I would come back to Germany afterward [the pageant]…. I had planned to continue studying in Germany after the summer vacation–I didn’t think that I would have a career [in Hong Kong].”

After Sisley won first runner-up, her boyfriend left his job in Germany and flew to Hong Kong, eventually finding work at an indoor skiing facility. Sisley was touched by his sacrifices to continue their relationship.  As her career took flight, they spent less and less time together. “Unfortunately, too many things happened and there was no chance for us to go on dates. He spent more time with my parents than with me. He was really depressed because he had no money and no friends. Ultimately, he decided to return to Germany.” Even though their relationship did not work out, Sisley and her ex-boyfriend still remain in touch.

Caught in her fascinating memories, Sisley smiled as she recalled her young love experience. Seeming to realize that she may have shared too many personal details, she blurted out, “Why am I saying all this on a public show?!”